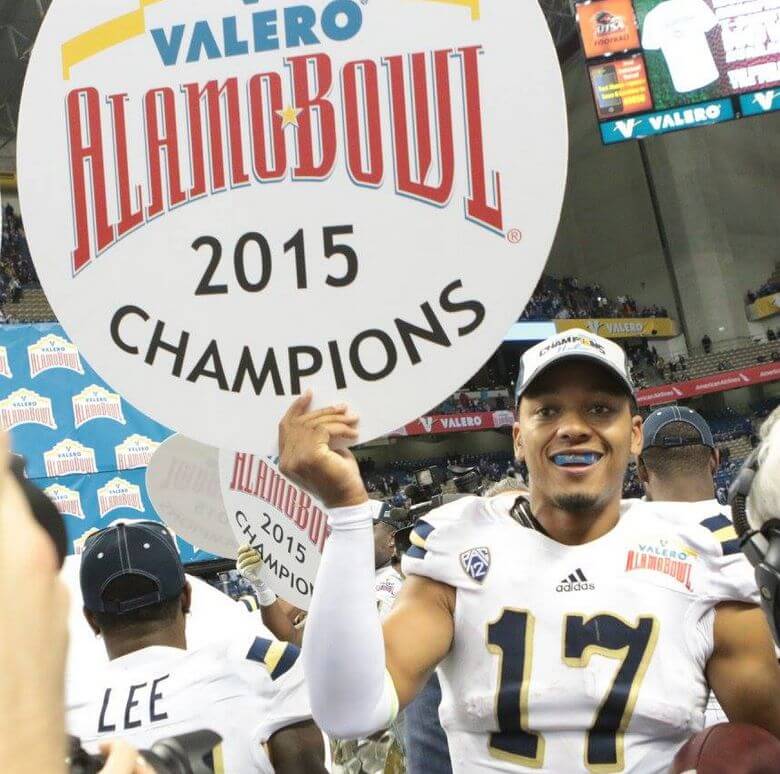 AMAZING CAN HAPPEN IN THE BLINK OF AN EYE
The Valero Alamo Bowl continued its tradition of close scores and exciting finishes as #14 UCLA withstood a furious second half comeback by #11 Kansas State and held on to win the 2015 Valero Alamo Bowl 40-35. Kansas State was unable to recover an onside kick with 1:21 remaining in the game and UCLA kneeled the ball to cool what was a scoring explosion by both teams in the second half.

Kansas State scored 15 unanswered points in the third quarter to overcome a 31-6 halftime deficit and cut the lead to 31-21 before the Bruins got a field goal by Ka’imi Fairbairn to go up by 10. Kansas State executed a 15 play, 91 yard drive capped off by a one-yard TD run by Jake Waters to cut the lead to 34-28. UCLA responded quickly with a 67-yard TD run by Paul Perkins and after a failed two point conversion, led 40-26. Waters led the Wildcats back down the field and threw a 29-yard TD pass to Tyler Lockett, to end the scoring.

The 2015 Valero Alamo Bowl was the seventh time in the last 10 games that the outcome was decided until the final minutes. Here are the six games:

UNFAMILIAR FOES
The 2015 Valero Alamo Bowl marked only the third meeting between Kansas State and UCLA. The Bruins now hold a 2-1 advantage since they won the first meeting 23-9 in 2009 at UCLA. The Wildcats win against UCLA was a 31-22 victory in 2010 at home.

FEELING PERKY
UCLA’s Paul Perkins rushed for 194 yards, placing him third in Valero Alamo Bowl history behind Terrance Ganaway’s 200 yards in 2011 for Baylor and the record 240 yards from   Dan Alexander of Nebraska in 2000.

BRUIN BULLIES
UCLA recorded seven sacks in its 40-35 victory against Kansas State in the 2015 Valero Alamo Bowl, second most in Alamo Bowl history. The Bruins were led by Deon Hollins who became the fourth player in the game’s history to record three sacks. Additionally, the Wildcats’ Jonathan Truman led all players with 14 tackles tied for fifth best in Alamo Bowl history.

SNYDER VS. MORA
The 22nd Valero Alamo Bowl was the first ever head-to head meeting between Kansas State’s Bill Snyder and UCLA’s Jim Mora. Snyder wrapped up his 23rd season in Manhattan (187-94-1) while Mora finished his 4th with the Bruins (29-11). Snyder has led K-State to 16 consecutive bowl games in two different coaching stints, including an appearance in the Alamo Bowl in 1998. Two weeks after the Valero Alamo Bowl Snyder was invited inducted into the College Football Hall of Fame.

A TEXAS TRADITION
This is UCLA’s first postseason appearance in the Alamo City. But the Bruins have seen success playing in the Lone Star State in recent years, having played games in the state of Texas the previous six seasons, including tonight. UCLA improved to 5-2 in bowl games played in Texas after its 40-35 victory over Kansas State in the Valero Alamo Bowl.

MORA THE SAME
UCLA’s appearance in the Valero Alamo Bowl is the squad’s third consecutive postseason invite under head coach Jim Mora. UCLA has gone bowling in 10 of the previous 12 seasons. Mora is the first Bruins head coach to win at least 9 games in 3 consecutive seasons.

TEN IT TO WIN IT
UCLA’s 40-35 win over Kansas State in the Valero Alamo Bowl gives the Bruins back-to-back 10-win seasons for the first time since 1997-98. It’s also the Bruins 10th consecutive win outside the Rose Bowl.

STREAKING BRUINS
UCLA’s win in the Valero Alamo Bowl is its eighth consecutive win against a non-Pac 12 opponent. The Bruins also finished the season with a perfect 7-0 record on the road.

BRETT “THE HITMAN” HUNDLEY
Bruins quarterback Brett Hundley continued his onslaught on the UCLA record-book with another memorable performance in the Valero Alamo Bowl. The junior signal-caller finished the season with 3,155 yards passing and 22 touchdowns through the air. The dual-threat QB added 644 yards and 10 TDs on the ground. Hundley is the Bruins career leader in touchdown passes with 75, second in rushing yards (1,647) and first in rushing touchdowns (31).

SHARPSHOOTER
UCLA quarterback Brett Hundley finished the Valero Alamo Bowl 12-24 for 126 yards and 3 total touchdowns. He moved past Cade McNown into 4th place on the Bruins all-time list for passing yards in a season (3,155). Hundley only completed 50 percent of his passes tonight despite connecting on 70.4 percent of his throws in the regular season.

THE HUNDLEY GAMES
UCLA improved its record to 7-1 on the season when quarterback Brett Hundley rushes for a touchdown. The junior QB scampered for two first-quarter TDs and finished with 96 yards rushing on 11 carries in UCLA’s 40-35 victory over Kansas State in the Valero Alamo Bowl.

JUST WIN, BRUINS
UCLA signal caller Brett Hundley is now only one win shy of the school record for most wins by a starting quarterback. The junior quarterback’s win in the Valero Alamo Bowl was the 29th of his Bruin career, putting him one victory behind former UCLA standout QB Cade McNown (30).

THAT’S A WRAP
UCLA Butkus Award-winning linebacker Eric Kendricks finished the season as the FBS leader in solo tackles in 2015 (149) and #4 on the Bruins all-time single-season tackle list.
Kendricks’ capped a legendary UCLA career in the Valero Alamo Bowl with a team-high, 10-tackle performance, including an 8-yard sack on the Bruins first defensive play of the game, his third sack of the season. He added another sack in the second half and finished the game with three tackles for loss. The senior Bruin is UCLA’s all-time leader in career tackles (481).

MYLES AND MYLES AHEAD
UCLA linebacker Myles Jack’s 2nd-quarter interception of K-State quarterback Jake Waters was his first interception of the year and third of his young career. The sophomore Bruin standout finished second on the team with seven pass break-ups on the season. Jack finished the night with 8 tackles, two for losses, in addition to his 41-yard interception return.

SACK LUNCH, ANYONE
UCLA’s seven sacks in the Valero Alamo Bowl is the most the team had in any game this season.Before tonight, the Bruins had only tallied 22 sacks as a team the entire season.

CATCHING ON
UCLA wide receiver Jordan Payton’s 2-yard grab in the first quarter of the Valero Alamo Bowl continues a streak of 16 consecutive games with a reception. Payton finished the night with 58 yards on 4 catches and moved into 6th place on UCLA’s single-season reception list with 67. He improved to 13th in career reception with 123.

WHAT A RUSH
The UCLA tandem of quarterback Brett Hundley (96) and tailback Paul Perkins (194) combined for 290 yards on the ground in tonight’s Valero Alamo Bowl, the highest rushing output of the season for the Bruin duo.

FOR KICKS…AND GIGGLES
UCLA kicker Ka’imi Fairbairn has made 29 consecutive field goals from 35 yards and in. He finished the season converting 13 of his final 14 attempts. His 10 points tallied in the Valero Alamo Bowl moved the junior specialist into fifth place on the Bruins career scoring list (306 points). Fairbairn’s 44-yard boot late in the 3rd quarter ended a 15-0 Wildcat run and were the Bruins only points of the period.

CATCHING A COMEBACK
Kansas State wide receiver Tyler Lockett set a Valero Alamo Bowl record with 13 receptions, beating the previous record of 11 grabs by Purdue’s Isaac Jones in the 1998 Alamo Bowl against Kansas State. Fellow Wildcat wide receiver Curry Sexton had 10 catches to place tied for third on the all-time Alamo Bowl list. On the season, Lockett and Sexton became the first pair of Kansas State teammates to each have 1,000+ receiving yards.

MADE FOR EACH OTHER
The pass and catch team of Kansas State quarterback Jake Waters and Tyler Lockett tried to swing the momentum in the 2015 Valero Alamo Bowl after KSU fell to a 31-7 deficit. Waters connected with Lockett for the 20th time in their careers in the third quarter for a three yard touchdown pass and hooked up again on a two-point conversion. The two met up again late in the fourth quarter as Water hit Lockett for a 29 yard touchdown to cut UCLA’s lead to five. In their time together, Waters has connected with Lockett for 176 completions and 2,658 yards, including 13 completions for 164 yards and two touchdowns in the 2015 Valero Alamo Bowl.

LOCKING DOWN THE RECORD BOOK
Kansas State senior receiver Tyler Lockett moved up to second in Kansas State career all-purpose yards by hauling in a 14-yard pass from Jake Waters early in the third quarter of the 2015 Valero Alamo Bowl. The four time Walter Camp All-American ranks in the Top 10 in school history in more than 20 categories and is the all-time school record holder for career receptions (249), career receiving yards (3,552), career receiving touchdowns (29) and career kickoff return yards (2,193).

HUNTING HUNDREDS
Wildcat receiver Tyler Lockett’s 164-yard receiving performance in the 2015 Valero Alamo Bowl put him over the 100-yard mark for the eighth time this season, tying current Green Bay Packer Jordy Nelson for the most 100-yard games in a season. Lockett is also the career 100-yard receiving games leader with 17.

NO PAWS GO
Aside from a 25-yard scramble by Kansas State quarterback Jake Waters, the Wildcats were held to 16 rushing yards in the 2015 Valero Alamo Bowl, including -10 yards rushing on 14 carries in the first half. The 16 yard total was the second lowest in Alamo Bowl history and was the Wildcats’ second worst rushing game of the season after being held to one yard rushing by West Virginia. Kansas State averaged 143 yards per game rushing in 2015.

SLOW START
Kansas State was held scoreless in the first quarter for only the third time this season as the UCLA Bruins jumped out to a 17-0 first quarter lead en route to a 40-35 Bruin victory. The Wildcats also lost to Auburn 20-14 and Baylor 38-27 after failing to score in the opening period.

CALL HIM MR. RELIABLE
Kansas State freshman kicker Matthew McCrane connected on both of his field goal attempts in the 2015 Valero Alamo Bowl. The Brownwood, Texas native is 18-19 on the year after taking over in the middle of the year and holds the freshman record for points with 94.

SECOND TO NONE
The 2015 Valero Alamo Bowl marks the second time in 22 games that the Alamo Bowl was played on Jan. 2nd, the last came in 2010, a 41-31 Texas Tech victory over the Michigan State Spartans.

LONE STAR HOMECOMING
The State of Texas is well represented in the Kansas State locker room as 22 Wildcats players returned to their home state to play in the 2015 Valero Alamo Bowl, including two players from San Antonio, defensive back Joseph Bonugli and defensive tackle C.J. Reese.

RECORD GIVING
The Valero Alamo Bowl awarded a record number of scholarships as 55 Bexar County high school students will split $412,500 to attend the college of their choice. That brings the 15 year scholarship total to 452 students sharing $1.64 million. Through payouts to the schools participating in the past bowl and neutral site games, the bowl has contributed another $90 million to institutions of higher education.

ALL-TIME ALAMO BOWL ATTENDANCE
A crowd of 60,517 attended the 2015 Valero Alamo Bowl, the 13th largest crowd in bowl history and the seventh highest total among the 38 bowl games following the 2014 college football season.