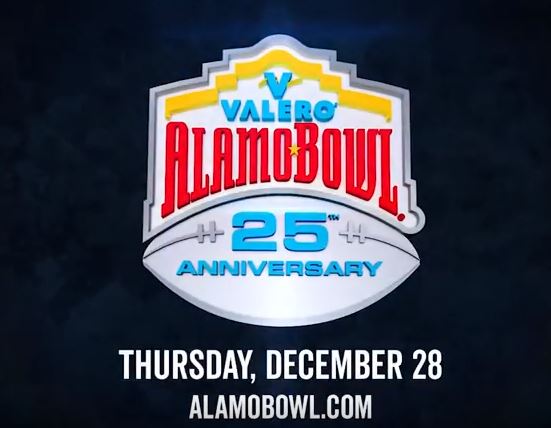 Designated the visiting team and occupying the east sideline, Stanford University is led by Head Coach David Shaw. In his seventh year as Head Coach for the Cardinal, Stanford will be making their first appearance in the Valero Alamo Bowl.

This season Stanford won eight of their final nine regular-season games, including upsets over Notre Dame and Washington. They’ve appeared in the Pac-12 Championship four times in the past six years including to USC 31-28 on Friday. The Pac-12 North Champions finished their season with a 9-4 mark (7-2 Pac-12) and won the Pac-12 North title.

The Stanford offense averages 32 points per game and is led by junior running back and Heisman contender Bryce Love. Love ranks first among Power 5 conference running backs in rushing yards (1,973), rushing yards per game (164.4), yards per carry (8.3), 100-yard rushing games (11), 50-yard rushes (12/FBS record) and 60-yard rushes (6). He has posted a 30-yard run in an FBS-record 13 straight games. Love leads the Pac-12 and ranks third nationally in all-purpose yards per game with 171.0. He has surpassed 100 yards rushing in 11 of 12 games he has played in this season.

Senior defensive tackle and team captain Harrison Phillips leads the team with 100 tackles this season and has a team-high 17 tackles for loss, 7.5 sacks and two fumble recoveries.

TCU is led by Head Coach Gary Patterson, who is in his 17th season as the Head Coach of the Horned Frogs. Patterson is TCU’s all-time winningest coach boasts a 159-57 record. TCU finished their season 10-3 (7-2 Big 12) following a Big 12 Championship appearance. This is TCU’s 7th 10+ win season in the past ten years.

“We’re very excited and appreciative to be returning to San Antonio for the Valero Alamo Bowl,” Patterson said. “(Valero Alamo Bowl President/CEO) Derrick Fox and his staff do a great job with hospitality. Being in San Antonio is also a positive for us in recruiting and our fans being able to make the trip. Stanford is an outstanding football team and will be a great challenge. We’re looking forward to the opportunity to win our 11th game, sending our seniors out on a high note and building momentum for our offseason program and next year.”

TCU will be making its second appearance in San Antonio. In January 2016, a capacity crowd saw the #11 Horned Frogs rally from the biggest first half deficit in Valero Alamo Bowl history to complete the biggest comeback in bowl history to beat Oregon 47-41 in triple overtime.

This season, TCU leads the nation in red-zone defense, allowing scores on just 64.5 percent of opponent trips – the lowest mark by any FBS team since 2011. The Horned Frogs lead the Big 12 Conference in defense, holding opponents to an average 17.6 points per game and just 328.5 yards per game and averaging 3.15 sacks a game. TCU also ranks second in the nation in rushing defense.

The TCU offense averaged 34.5 points per game and was led by quarterback Kenny Hill who averaged 236.7 passing yards per game and recorded 21 touchdowns on the season.

Junior linebacker Ty Summers is a San Antonio native and attended Reagan High school. Summers recorded 60 tackles and four sacks on the season, along with a fumble at Texas Tech this season. 2016 Valero Alamo Bowl Defensive Most Valuable Player Travin Howard has a team-high 98 tackles and is a two-time first-team All-Big 12 selection.

The 2017 Valero Alamo Bowl will be the fourth consecutive Top-15 matchup the Bowl has produced and marks the fourth year of a conference agreement to match the #1 Big 12 and #1 Pac-12 teams outside of the CFP selections. The conference agreement started in 2014 and was extended this year to go through the 2025 college football season.

The Valero Alamo Bowl averages a 13 CFP ranking and has had capacity crowds at seven of the last 11 matchups.

The Valero Alamo Bowl will kick off on Thursday, December 28 at 8 p.m. CST. Tickets are available at www.alamobowl.com or the Alamodome Box Office.

Fans looking for the ultimate game day experience can check out PrimeSport, the Official VIP Hospitality and Travel Package Provider of the 2017 Valero Alamo Bowl. PrimeSport has exclusive packages to get you to the game: https://www.primesport.com/d/alamo-bowl-tickets