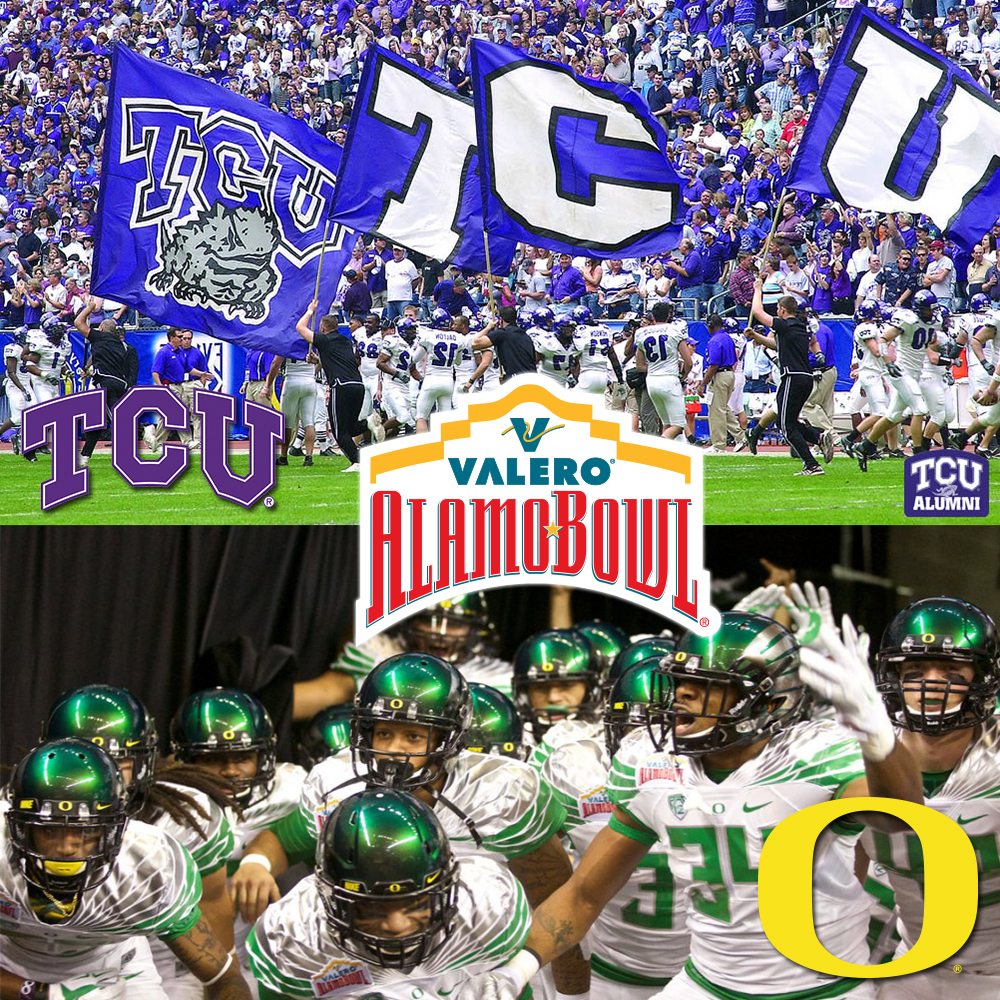 #15 Oregon is led by Head Coach Mark Helfrich. This was Helfrich’s third year at the helm for Oregon Football. Oregon, who will be making their eleventh straight bowl appearance, last played in the Valero Alamo Bowl in 2013, when Heisman winner Marcus Mariota led the Ducks to a 30-7 win over Texas. The Ducks finished the regular season 9-3 (7-2 Pac-12), winning their final six games. Oregon has won nine or more games in nine consecutive seasons.

“We are very excited to be back at the Valero Alamo Bowl in one of America’s great cities,” Helfrich said. “Our fans and our entire program look forward to a tremendous bowl experience and a huge challenge against Coach Patterson and their program.”

The Oregon offense, averaging 43 points per game, is highlighted by senior quarterback Vernon Adams, Jr. and sophomore running back Royce Freeman. Adams, Jr. finished second in the country with a 179.6 passer rating and threw for a combined 11 touchdowns and one interception over the course of the Ducks’ final three games, all of them wins. Freeman, a first-team Pac-12 selection this season, finished fourth in the nation with 1,706 rushing yards and averaged 6.6 yards per carry, third-best for all running backs with a minimum 200 attempts. Deforest Buckner leads the Ducks on defense with a team-best 16 tackles for loss and 10 sacks, tied for first in the Pac-12.

Designated the home team and occupying the west sideline, #11 TCU is led by Head Coach Gary Patterson. This was Patterson’s fifteenth year as Head Coach for TCU Football. The Horned Frogs, who will be making their second consecutive bowl appearance, will make their first ever appearance in the Valero Alamo Bowl.

TCU (10-2) has reached the 10-win mark for the sixth time in the last eight years and 10th time in 15 seasons under Patterson. TCU has a Davey O’Brien Award finalist in quarterback Trevone Boykin and a Biletnikoff Award finalist in wide receiver Josh Doctson. Three TCU starters are San Antonio natives. Tailback Aaron Green (Madison High School) became the Horned Frogs’ first 1,000-yard rusher since 2010 with his team-high 1,171 yards and 10 touchdowns. Safety Derrick Kindred (Wagner High School) is second on TCU with 79 tackles to go with two interceptions, while linebacker Ty Summers (Reagan High School) was named the Walter Camp National Defensive Player of the Week after his 23 tackles in the 28-21 double-overtime victory over Baylor in the regular-season finale.

“Bowl games are a reward for our players and the entire TCU community,” Patterson said. “We’re looking forward to making our 16th bowl trip in the last 18 years and having a chance to win our 11th game this season. It’s great to be headed to San Antonio and the Valero Alamo Bowl to face a high-level opponent in Oregon. Our kids are excited. With several of our players being from San Antonio and the surrounding area, it’s a trip home. The Valero Alamo Bowl is a great bowl and well known for its hospitality. It’s always important to win your bowl game to build momentum for next year.”

Take a look at what’s being said about this year’s Valero Alamo Bowl:

Patrick Stevens (Washington Post) ranks our game as the #2 Bowl game this season.

Matt Brown (Sports On Earth) ranks the Valero Alamo Bowl as the #4 Bowl game this season.

The 2016 Valero Alamo Bowl will be the second consecutive Top-15 matchup the Bowl has produced and marks the second year of a six-year agreement between the Pac-12 and Big 12 allowing the Bowl to pick the #1 schools from both conferences outside of the CFP selections. This year’s game could be the third straight time the winner finishes in the final Top 10 poll.

Tickets for the 2016 Valero Alamo Bowl can be purchased online at www.alamobowl.com or by calling Ticketmaster at 800-745-3000 or visiting www.ticketmaster.com.  In addition, fans can purchase tickets at the Alamodome Southwest Box Office from 10 a.m. to 5 p.m. Monday-Friday.