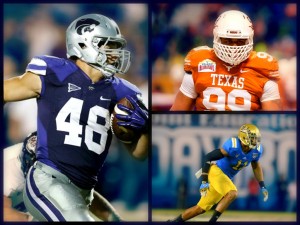 Want a good indicator on how ready college football fans are for the start of the season? More than three months before the first game kicks off, CBS Sports.com’s Jerry Palm filed his first bowl predictions story of the year and received 18,000 comments within 24 hours.

That type of passion is why college football is now the clear #2 ranked sport in terms of fan avidity trailing only the NFL.

Our 2013 Bowl Chairman Pat Frost is such an avid college football fan he saved all of last year’s preseason bowl projections. To Jerry’s credit, he had the highest percentage of correct picks. He even selected the Valero Alamo Bowl’s 2013 Pac-12 team in Oregon although he missed on the Big 12 side. He picked TCU who finished their 2013 season 4-8 ineligible for post-season play.

This year, Jerry has Oklahoma State playing Stanford in the Valero Alamo Bowl three years to the day of the #3 Cowboys dramatic 41-38 overtime victory over the #4 Cardinal in the Fiesta Bowl on January 2, 2012.

Overall he was correct on 19 of 70 (27%) picks prior to the 2013 season highlighted by him hitting both sides of the Capital One Bowl (Wisconsin vs. South Carolina) and the Las Vegas Bowl (Fresno State vs. USC) match-ups.

ESPN.com’s Brett McMurphy and Mark Schlabach posted their “Way-too-early bowl projections” on Sunday and the new format prompted some non-traditional selections with Brett having Cincinnati in the Cotton Bowl and Mark slotting Marshall in the Peach Bowl.

With our choice of the top teams from the Pac-12 and Big 12 after the New Year’s Six bowls, Brett and Mark had UCLA playing in San Antonio against Texas or Kansas State, respectively.

Based on last year’s success rate, I wouldn’t take any of the preseason selections to the bank but I’m ready for the season to start and watch the drama unfold.

Unfortunately, the kickoff to the regular season is still 99 days away and that’s a problem.