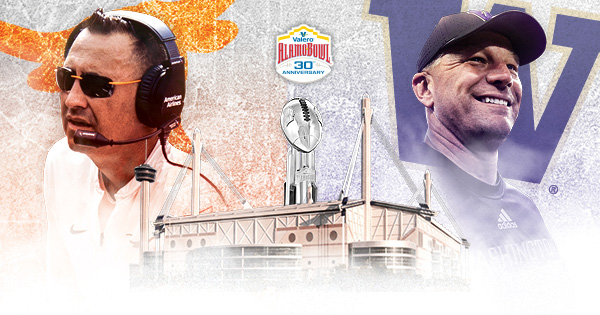 The #20 Texas Longhorns will face #12 Washington Huskies in the 30th annual Valero Alamo Bowl on December 29 at 8:00 p.m. CST in the Alamodome and will be broadcast on ESPN.

This year’s game is the highest ranked matchup outside of the New Year’s Six bowl games and is the 7th time in the last 9 years the Valero Alamo Bowl has featured two Top 20 teams.

Texas went 8-4 overall and 6-3 in Big 12 in regular season. Designated the away team and occupying the west sideline this year, the Longhorns are led by Head Coach Steve Sarkisian and feature a balanced attack that is averaging 35.7 points per game (20th NCAA) and allowing just 21.2 points per game (30th NCAA).

Longhorns quarterback Quinn Ewers has thrown for 1,808 yards and 14 touchdowns with six interceptions this season. This is Texas’ sixth Valero Alamo Bowl, but only the second time a first-year quarterback was at the helm. In 2006, Colt McCoy won offensive MVP honors completing 26 of 40 passes for 308 yards and two touchdowns.

His top receiving target is Xavier Worthy who had 53 catches for 676 yards (12.8 yard per reception) and 9 touchdowns.

Junior outside linebacker Jaylan Ford led the teams in tackles 109 including 10 tackles for a loss and 2 sacks.

This will be the sixth time in the Valero Alamo Bowl for Texas and sixth bowl game for Sarkisian, but this is his first bowl game as head coach for the Longhorns. Texas is 4-1 in their previous five appearances:

Texas is making its 58th all-time bowl appearance this season, the third-most in the country behind only
Alabama and Georgia.

Washington went 10-2 overall and 7-2 in Pac-12 play with three wins against Top 25 teams. Designated as the home team and occupying the east sideline this year, the Huskies led by Pac-12 Co-Head Coach of the Year Kalen DeBoer, who took over as head coach this season. Washington is on a six game winning streak (sixth longest active streak in the NCAA) including a 51-33 Apple Cup road win over Washington State.

This will be the sixth time in the last seven years that the Valero Alamo Bowl will feature a team with a Pac-12 Coach of the Year award winner.

Washington quarterback Michael Penix Jr., who played at Indiana while DeBoer was the Hoosiers offensive coordinator, leads the nation with 4,354 passing yards and 362.8 passing yards per game. With 105 passing yards in the Valero Alamo Bowl, he will break Washington’s single season passing record. He already holds the school record for most passing yards in a game with 516 in their 49-39 win over Arizona on October 15.

Price’s 4 passing touchdowns is also tops in Washington bowl history along. In addition his 80 yard touchdown pass to Jermaine Kearse is the longest pass in a Huskies bowl game.

Washington is the first team in Valero Alamo Bowl history to have two receivers with over 1,000 yards in receiving in Jalen McMillian (1040 yards) and Rome Odunze (1088 yards). The only other two teams in the NCAA this year with two 1,000+ yard receivers are Arizona and Ohio State.

Washington’s Kearse holds the Valero Alamo Bowl record for most receiving yards with 198 yards in 2011. That also ranks as a Washington all-time bowl record.

DeBoer, who set the Huskies record for wins by a first year head coach, is the 30th football coach in Washington history and the 30th annual Valero Alamo Bowl will make his first time as a head coach in a bowl game. His previous post-season experience includes leading his alma mater the University of Sioux Falls to three national championships as a head coach as well as bowl trips as an assistant coach.

The Valero Alamo Bowl record holder for sacks is Texas’ Alex Okafor in turned in a dominating performance in the 2012 game sacking Oregon State quarterback’s 4.5 times.

The Huskies return to San Antonio for the first time in 11 years. Washington’s only other appearance at the Valero Alamo Bowl was in 2011. Head Coach Steve Sarkisian and the Huskies lost a historic 67-56 offensive shootout against Baylor and Heisman winner Robert Griffin III.

The Huskies 56 points scored in 2011 game is tops in Washington bowl history and #2 all-time in Valero Alamo Bowl history, one point ahead of the 55 points Texas scored in 2020.

Including the 2011 Valero Alamo Bowl loss, Washington has lost 4 straight bowl games to current Big 12 schools with their last win coming over #2 Oklahoma in the 1985 Orange Bowl.

Texas and Washington have played each other 4 previous times with the Longhorns holding a 3-1 advantage.

Neither team made a bowl game last year with Washington finishing with a 4-8 record and Texas at 5-7.

Three of the top five most-viewed Valero Alamo Bowls in history include either Texas or Washington.