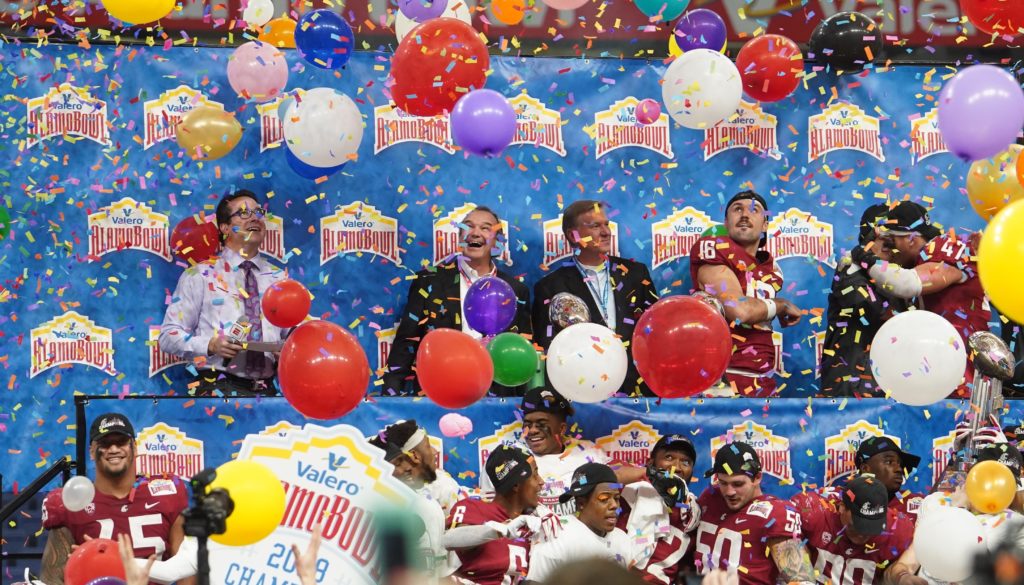 Are you ready to ring in the New Year with touchdowns?

The 27th annual Valero Alamo Bowl will kick off a 6:30 p.m. CST at the Alamodome in San Antonio on Tuesday, December 31 in an exclusive primetime window on ESPN.

The first two Valero Alamo Bowls were both held on New Year’s Eve in games that featured California vs. Iowa in 1993 and Washington State vs. Baylor in 1994.

“The Valero Alamo Bowl has a well-deserved reputation as one of most exciting bowl games each year,” said Brad Barron, Chair of the 2019 Valero Alamo Bowl. “This excellent primetime kickoff will allow fans the best opportunity to watch another fantastic matchup between the Big 12 and Pac-12 conferences. Everyone attending the game in San Antonio will have the added bonus of being able to enjoy one of the nation’s best New Year’s Eve celebrations and fireworks shows right outside the Alamodome.”

Last year the Valero Alamo Bowl played on Thursday, December 28 and featured #13 Washington State’s thrilling 26-24 victory over #24 Iowa State in front of an Alamodome crowd of 60,675 and another 6.1 million viewers on ESPN, the #1 and #2 marks among the non-CFP bowl games, respectively.

Persons interested in joining us for fantastic, fireworks fueled football can go to Tickets section of www.alamobowl.com and join the bowl’s priority ticket list to be eligible for this year’s presale.

Alamodome parking lots will be presold to Valero Alamo Bowl buyers and the lots will remain open until 2 a.m. so fans can enjoy all of the New Year’s Eve festivities.

Through 2025, the Valero Alamo Bowl will continue to match the #1 teams from the Big 12 and Pac-12 Conferences after the CFP selections.  ESPN and Valero agreements for this game that has delivered five straight Top 25 matchups also have been extended through 2025.

This year’s match-up will be announced on Sunday, December 8.