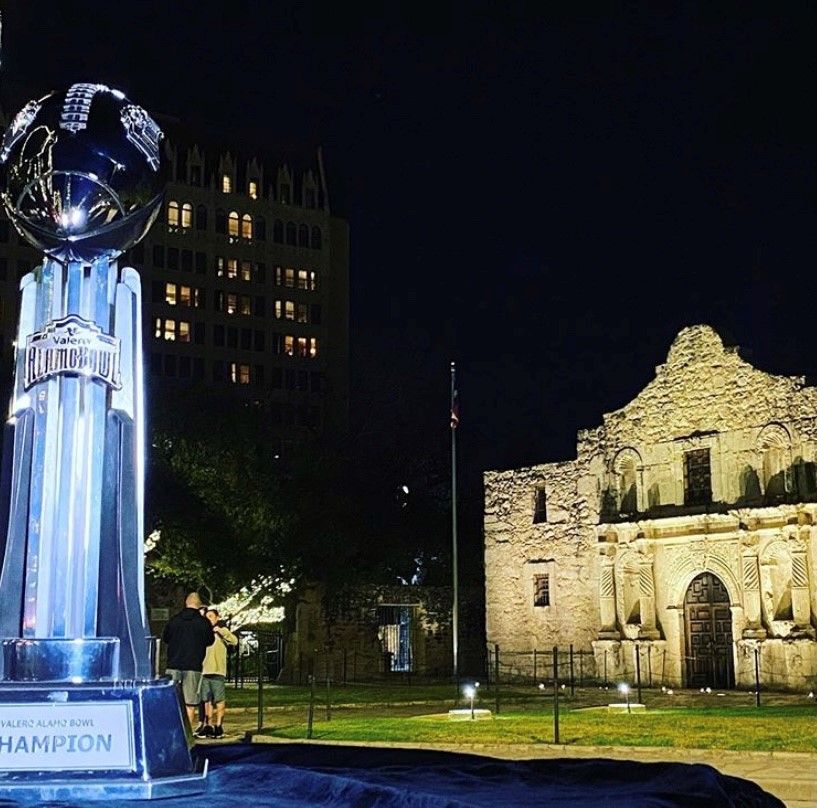 Bowl Kicks Off on December 29

SAN ANTONIO, TEXAS – The 28th annual Valero Alamo Bowl will be played at the Alamodome in San Antonio on Tuesday, December 29 in an exclusive primetime window on ESPN. Kickoff time will be 8 p.m. CST.

Matching up the top teams from the Big 12 and Pac-12 conferences after the CFP selections, the 2020 Valero Alamo Bowl is on a familiar date as 11 past games have also kicked off on December 29.

“Given all that we have been through these past nine months, the Valero Alamo Bowl is looking forward to delivering a much-needed boost to our city’s economy and rewarding our tourism community who always provide such memorable visitor experience,” said Clay Jett, Chair of the 2020 Valero Alamo Bowl.

“We thank our loyal ticket buyers, partners and sponsors for their patience as we planned to safely showcase our city and two outstanding teams from the Big 12 and Pac-12 conferences to six million viewers on ESPN. With Valero’s strong support, a sponsor since 1993, and title sponsor since 2007, we are looking forward to another unforgettable match-up at the Alamodome.”

Last year the Valero Alamo Bowl played on Tuesday, December 31 with Texas upsetting #11 Utah 38-10 in front of an Alamodome crowd of 60,147 and another 6.4 million viewers on ESPN.  The event brought 35,110 visitors to town and delivered a $35.8 million total economic impact and according to a report conducted by Economic Analytics Consulting, LLC.

The current Alamodome safety plan allows attendance at a reduced maximum capacity of 11,000 fans in the 65,000-seat facility.

Those interested in game tickets can join the Bowl’s priority ticket list to sign up for an early December onsale. Ticket availability and seating capacity for the Valero Alamo Bowl will be based on the Alamodome’s latest safety protocols.

The organization has produced 27 bowl games and served as the local host for 11 neutral site games. These 27 Valero Alamo Bowl games have combined to deliver over $950 million in total economic impact to San Antonio, 148 million viewers, 1.62 million attendees to the Alamodome and $128 million to higher education through team payouts ($122 million) and local scholarships ($6 million).

About Valero Valero Energy Corporation, through its subsidiaries (collectively, “Valero”), is an international manufacturer and marketer of transportation fuels and petrochemical products. Valero is a Fortune 50 company based in San Antonio, Texas since 1980.  Valero operates 15   refineries located in the United States (U.S), Canada, and United Kingdom (U.K) with 14 ethanol plants located in the Mid-Continent region of the U.S. Valero is also a joint venture partner in Diamond Green Diesel, which operates a plant in Louisiana and is  North America’s largest biomass-based diesel plant.  Valero sells its products in the wholesale rack or bulk markets in the U.S., Canada, the U.K, Ireland and Latin America. Approximately 7,000 outlets carry Valero’s brand names. Please visit www.valero.com for more information