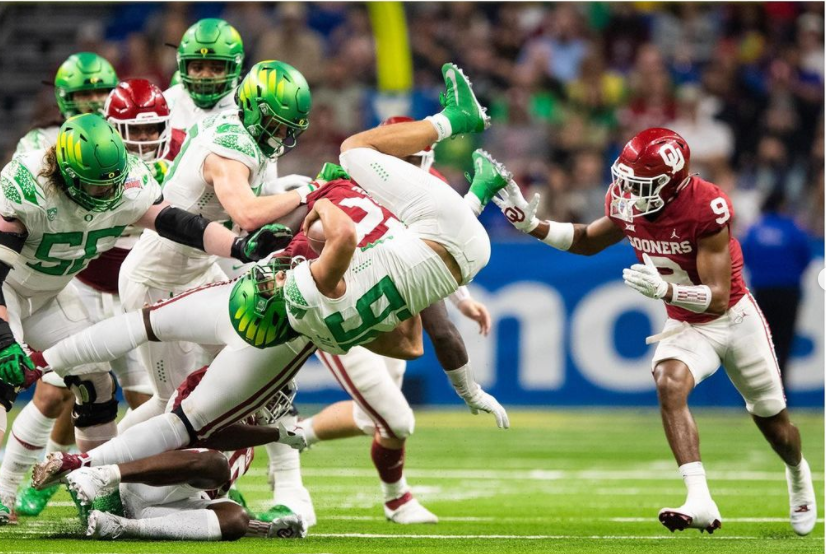 Oklahoma’s Caleb Williams and Kennedy Brooks are the first pair of teammates in Big 12 history with 3 passing touchdowns and 3 rushing touchdowns in a bowl game, respectively. They are also the first teammates in Valero Alamo Bowl history to accomplish this feat. Washington’s Keith Price threw for four touchdowns and ran for three himself in the 2011 Valero Alamo Bowl. In the Huskies 67-56 loss to Baylor, Price accounted for seven of his team’s eight touchdowns.

BEST ON THE FIELDS

YOU GET YARDS, EVERYONE GETS YARDS

This year Oklahoma and Oregon combined for 1,061 yards on offense and 53 first downs, both of which are the second most in Valero Alamo Bowl history. Baylor and Washington totaled a record 1,397 yards and 59 first downs in the 2011 Valero Alamo Bowl.

PICK TURNS TO POINTS
Oklahoma safety Justin Broiles snagged his second career interception on Oregon’s first offensive drive in the 2021 Valero Alamo Bowl. The Sooners capitalized on the turnover as Oklahoma running back Kennedy Brooks capped a nine-play, 54-yard drive after the interception with a 16-yard scurry into the end zone, the first of three Brooks scores.

Oregon running back Travis Dye became the fifth Oregon Duck to reach 3,000 career rushing yards with a six-yard run in the middle of the first quarter of the 2021 Valero Alamo Bowl. Dye totaled 153 yards on the ground and ran into the end zone once. Dye finished the year with at least 100 yards from scrimmage in 9 of the last 11 games.

Oklahoma wide receiver Marvin Mims hauled in a 55-yard touchdown pass from quarterback Caleb Williams in the second quarter of the Valero Alamo Bowl. This was Mims’ third touchdown reception of over 50 yards, and Mims caught three of the Sooners’ five longest passes of the 2021 season.

Oregon quarterback Anthony Brown launched a 66-yard touchdown pass to wide receiver Dont’e Thornton for the longest touchdown completion of the 2021 Valero Alamo Bowl. For the freshman Thornton, this was the longest reception of his young career.

Oklahoma quarterback Caleb Williams completed 21 of his 27 passes, good enough for a 78% completion percentage. That is the highest team percentage and second highest individual mark in Valero Alamo Bowl history. Texas quarterback Casey Thompson came in for an injured Sam Ehlinger to notch the highest completion rate of 80% in the 2020 Valero Alamo Bowl on 8 of 10 throwing.

Oklahoma kicker Gabe Brkic, one of three Lou Groza Award finalists, missed his first career PAT on Oklahoma’s first scoring drive in the 2021 Valero Alamo Bowl. Brkic had been 154-154 on PATs in four seasons with the Sooners.

FIRST TIME FOR EVERYTHING

In 2021, the Oklahoma Sooners made their first appearance in the Valero Alamo Bowl.

For the first time in Valero Alamo Bowl history, two interim head coaches led their respective teams. Bryan McClendon directed the Oregon Ducks following the departure of Mario Cristobal to the University of Miami while Bob Stoops stepped out of retirement for one more game on the Sooners’ sideline after Lincoln Riley left for the University of Southern California.

DON’T CALL IT A COMEBACK

Bob Stoops served as the interim head coach for Oklahoma during the 2021 Valero Alamo Bowl, marking his first game coaching the Sooners since retiring in 2017. With the Sooners’ 47-32 defeat of the Ducks, the 2021 College Football Hall of Fame inductee improved his overall record with Oklahoma to 191-48 (.799) and his bowl record to 10-9 (.526).

This was the fourth time the Valero Alamo Bowl has hosted the Pac-12 Championship Game runner-up. In the 11 year history of the conference’s Championship game, the runner-up has yet to win their bowl game.

In the final AP Top 25 ranking, Oklahoma finished #10 and Oregon was #22. That means for the 6th time in the last 9 years, the Valero Alamo Bowl Champion ended their season ranked in the Top 10. This was the eighth year the Valero Alamo Bowl has matched up the top team from Pac-12 and Big 12 conferences after the CFP selections. The matchup has yielded six Top 15 matchups and teams with a median CFP ranking of 14.

Outside of last year’s shortened season, the Valero Alamo Bowl has hosted at least one 10+ win team in the CFP era, but this year is the first time in the Bowl’s 29 year history it has matched-up two 10+ win teams.

After limiting capacity in the 2020 Valero Alamo Bowl to 11,000, this year’s matchup between Oklahoma and Oregon saw 59,121 watch the game in the 65,000 seat Alamodome. Twenty-five of the Valero 29 Alamo Bowls have been attended by at least 55,000 spectators. Here is the Valero Alamo Bowl all-time attendance list: