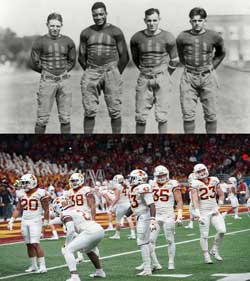 A new season of college football brings new and updated uniforms. We are entering Week 4 and have already seen schools take the field in multiple uniform options.

In recent years we have seen the craze and excitement around college football uniforms grow. Fans are more opiniated than ever before and some are calling this the fashion era of football. Although most traditional fans care more about the actual game than what players are wearing, most of the younger generations are enthralled with the “Look good. Feel good. Play good.” mentality that Deion Sanders brought to the game.

Many programs use these new uniforms to improve or change their brand image and bring new marketing opportunities to the table. Not only does it benefit the program, the fans and players love it too.

The 2019 season brings even more opportunity to this year’s uniforms with the 150th anniversary celebration. As we have seen in the first three weeks, each FBS school will be representing the symbolic 150th anniversary with a uniform patch on their chest. In addition, many schools have taken this opportunity to bring back old memories and draw inspiration from the past to create throwback uniforms.

Now, let’s look at some of the most talked about uniforms for the 2019 season:

Oregon – Year after year we see Oregon set a new bar for the season. Their chrome helmets in the 2012 Rose Bowl changed the game and they are continuing to build on their infinite number of uniform options with this year’s looks.

Michigan State – Michigan State’s lime green alternate uniforms have had plenty of attention. They step away from the traditional green for a new fluorescent look. You make the call, yes or no on the neon green?

TCU – The Horned Frogs have received praise for their fresh and clean looks for the 2019 season. The purple and black color combo continues to reign supreme with these new threads.

West Virginia – The Mountaineers have showcased some updated looks on the field this season as well. Overall, they have stuck to a more traditional look except for their most notable addition this season – the all gray set.