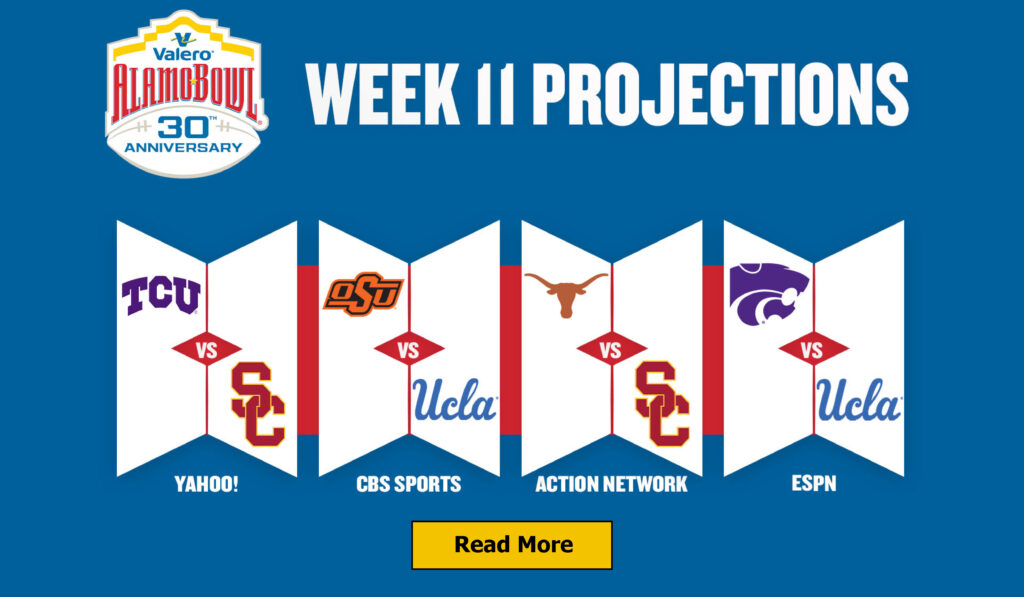 A Wild Week 10 in College Football

TCU (9-0) once again proved to be a second-half team in their 34-24 win over Texas Tech. With the victory, TCU joins Georgia, Michigan, and Ohio State as the only remaining unbeaten teams in the country. The Horned Frogs have a big conference matchup against Texas (6-3) this weekend in a game that could impact the Valero Alamo Bowl matchup.

Kansas (6-3) is bowl eligible for the first time since 2008! After sputtering a bit the last few weeks, Kansas got back on track with a convincing win over Oklahoma State (6-3), who has now lost three of their last four games. With their sixth win, Kansas surpassed their combined win total from the previous three seasons.

After a disappointing 1-2 start to conference play, Baylor (6-3) has now won three in a row. Are the Bears surging at the right time? Their upcoming battle with Kansas State (6-3) is key for each team to remain prominently in the mix for the Valero Alamo Bowl.

Score 40+ points, win, repeat. The Oregon Ducks (8-1) have now won eight in a row. As the only team in the PAC-12 without a conference loss, they control their own destiny. However, they shouldn’t expect to simply stroll into the championship game. The Ducks still have to face Washington (7-2), Utah (7-2) and Oregon State (6-3) over the next three weeks.

USC (8-1), UCLA (8-1), and Utah (7-2) were all victorious last weekend to stay within a single game of Oregon in the race for the Pac-12 championship. The weekend of Nov. 19 will feature the top 4 teams in the conference playing one another as Oregon hosts Utah and USC faces rival UCLA in the Rose Bowl.

With only three weeks left of the college football regular season, the bowl projections are starting to take shape. However, with so many teams from both conferences already at six wins, there’s still plenty of matchup possibilities. Here’s what experts are thinking so far:

The Valero Alamo Bowl has the #1 selection from the Big 12 and Pac-12 conferences after the six CFP bowls.

Based on the results from the remaining games, the final CFP polls, and the below criteria, the 30th annual Valero Alamo Bowl could feature another Top 25 matchup.

This year’s CFP semifinals will be played at the Chick-Fil-A Peach Bowl and Vrbo Fiesta Bowl on Saturday, December 31.

If the Big 12 or Pac-12 Champion doesn’t finish in the Top 4, they will go to Allstate Sugar Bowl or Rose Bowl, respectively. In this scenario, the Big 12 or Pac-12 conference’s Championship game loser could go to the Goodyear Cotton Bowl as at-large pick to face the top Group of Five team if they are ranked high enough in the final CFP poll.

The official team selection for the Valero Alamo Bowl is expected to be made on Sunday, December 4 by 3:30 p.m. CST, so beat the rush and buy your tickets today.