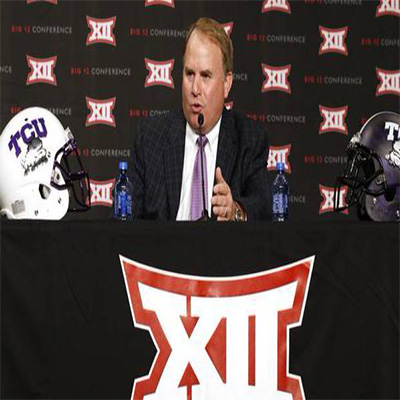 ESPN college football writers Mark Schlabach and Brett McMurphy have already released their 2015-2016 bowl projections, including their predictions on who will be playing in the Alamodome Saturday January, 2. Schlabach slotted Oklahoma and Stanford as this year’s Valero Alamo Bowl squads while McMurphy predicts a rematch of the 2010 Valero Alamo Bowl between Arizona and Oklahoma State. If McMurphy’s prediction holds up, it would mark the third rematch in Valero Alamo Bowl history (Penn State vs. Texas A&M [1999, 2007] and Iowa vs. Texas Tech [1996, 2001]).

Schlabach and McMurphy also predict big things for the Big 12 in the second ever College Football Playoff, both banking on TCU to make the National Championship. Shlabach predicts the Horned Frogs will face off against last year’s College Football Playoff champion, the Ohio State Buckeyes, while McMurphy believes the Auburn Tigers will vie for the trophy.

Big 12 Media Days were held in Dallas, TX and offered plenty of headlines. TCU enters the year as one of the favorites to not only win the conference, but represent the Big 12 in the College Football Playoff starting December 31, 2015. Oklahoma, Baylor, and Oklahoma State also look to be in the mix by the time bowl season rolls around.

Thursday will mark the beginning of Pac 12 Media Days, taking place in Burbank, California. Oregon once again enters the year as the top dog out west, but USC, UCLA, Arizona, Arizona State, and Stanford will look to upend the Ducks and climb their way up the postseason ladder.

However it shakes out, this year’s top-25 Valero Alamo Bowl showdown, featuring the #1 Pac-12 team and #1 Big 12 team after the College Football Playoff selections, will have the Alamodome rocking once again.

A full list of Schlabach and McMurphy’s 2015-2016 bowl projections: