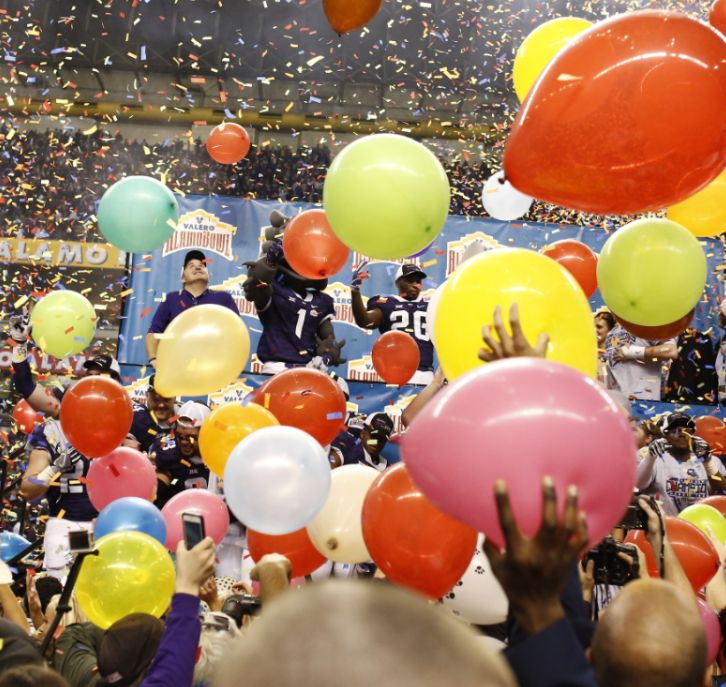 The 2016 Valero Alamo Bowl will kick off on Thursday, December 29th at 8 p.m. CST in a nationally televised game on ESPN unopposed from any other college or NFL football games on network television.

While this will be the 11th time in the bowl’s 24-year history the game will be played on December 29, it is only the third Thursday kickoff in bowl history.

“This year’s calendar provided us an excellent prime time Thursday slot that has performed well for ESPN during both the regular and post-season,” said Derrick Fox, Valero Alamo Bowl President/CEO. “We’re excited to showcase the Valero Alamo Bowl and San Antonio as viewership starts to peak during the post-season the night before the Capital One Orange Bowl and two days before the College Football Playoff semifinals.”

“Our two other Thursday kickoffs have delivered some of our most watched and most exciting games,” said Lamont Jefferson, Valero Alamo Bowl Chairman. “The Thursday kickoff should also work well for people traveling to the game as they can attend the game and then stay for the weekend to enjoy all San Antonio has to offer.”

The Valero Alamo Bowl is also the local host for the Notre Dame vs. Army game in the Alamodome on Saturday, November 12. The return of the Shamrock Series for this Veteran’s Day weekend match-up is the 11th neutral site game the Valero Alamo Bowl has promoted in its 24-year history.

Persons interested in game tickets for both games can go to www.alamobowl.com to join the bowl’s priority ticket list now to be eligible for this year’s presale.

Last year’s Valero Alamo Bowl was the second of a six-year agreement to match up the #1 teams from the Big 12 and Pac-12 conferences after the College Football Playoff.

Both years have delivered Top 15 match-ups and competitive games highlighted by TCU’s record comeback to beat Oregon 47-41 in triple overtime. In addition to a capacity crowd, last year’s game featured a bowl record peak viewership of 10.9 million and a $45.8 million total economic impact on San Antonio.

The Valero Alamo Bowl has produced seven of the Top 25 most-watched non-BCS/non-CFP broadcasts in ESPN history.