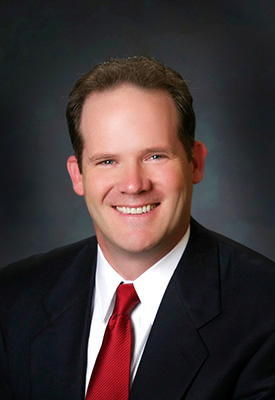 Brad Barron has been selected to succeed Michael Kiolbassa as chair of the organization’s Board of Directors.  Barron is president and CEO of NuStar Energy L.P., a San Antonio-based company that is one of the nation’s largest independent liquids terminal and pipeline operators.  He has been a Valero Alamo Bowl board member since 2007 and was chair-elect for the 2018 game.

“I am honored to have been named chairman of this year’s Valero Alamo Bowl, not only because it is one of the marquee bowl games in America, but because the game and its many related events have such a major impact on the San Antonio community in terms of economic impact and exposure,” said Barron.  “Through the years the Valero Alamo Bowl has had a tremendous run of success and I look forward to working with my fellow board members, the bowl staff and the hundreds of volunteers to continue that tradition for the benefit of our city and college football.”

In addition to the Valero Alamo Bowl, Barron is an active volunteer and leader for several other nonprofit organizations.

“Brad has always been an active Board member and he was especially helpful with our organization’s structure, fundraising and philanthropic efforts,” said Derrick Fox, president and CEO of the Valero Alamo Bowl. “His proven leadership abilities in business and civic endeavors, along with his passion for our community, will be invaluable as we continue to grow our game and its impact on San Antonio.”

The other officers for 2019 include:

The Valero Alamo Bowl also announced the addition of Jeffery Webb to their Board of Directors and Paul Abels to the position of Business Development Coordinator.

Webb is a partner at Norton Rose Fulbright US LLP, San Antonio, while Abels most recently served as a senior account executive for the San Antonio Commanders.

The organization has produced 26 bowl games and served as the local host for 11 neutral site games. The 26 Alamo Bowl games have combined to deliver $915 million in total economic impact to San Antonio, 142 million viewers, 1.56 million attendees to the Alamodome and $118 million to higher education through team payouts and local scholarships.

The 2018 Valero Alamo Bowl featuring #13 Washington State and #24 Iowa State and generated a total economic impact of $52.9 million for San Antonio and the #1 bowl payout to the participating teams among the 33 non-CFP bowl games with $8.25 million.

An Alamodome crowd of 60,675 watched Washington State’s thrilling 26-24 victory in person and another 6.1 million watched on ESPN, the #1 and #2 marks among the non-CFP bowl games, respectively.  The success of the event allowed Valero Alamo Bowl scholarship programs to award over $1 million to San Antonio students, tops in local scholarship giving among all of the bowl games.

Through 2025, the Valero Alamo Bowl will continue to bring the #1 teams from the Big 12 and Pac-12 Conferences after the CFP selections to San Antonio’s 65,000 seat Alamodome.  ESPN and Valero agreements for this game that has delivered five straight Top 25 match-ups also have been extended through 2025.