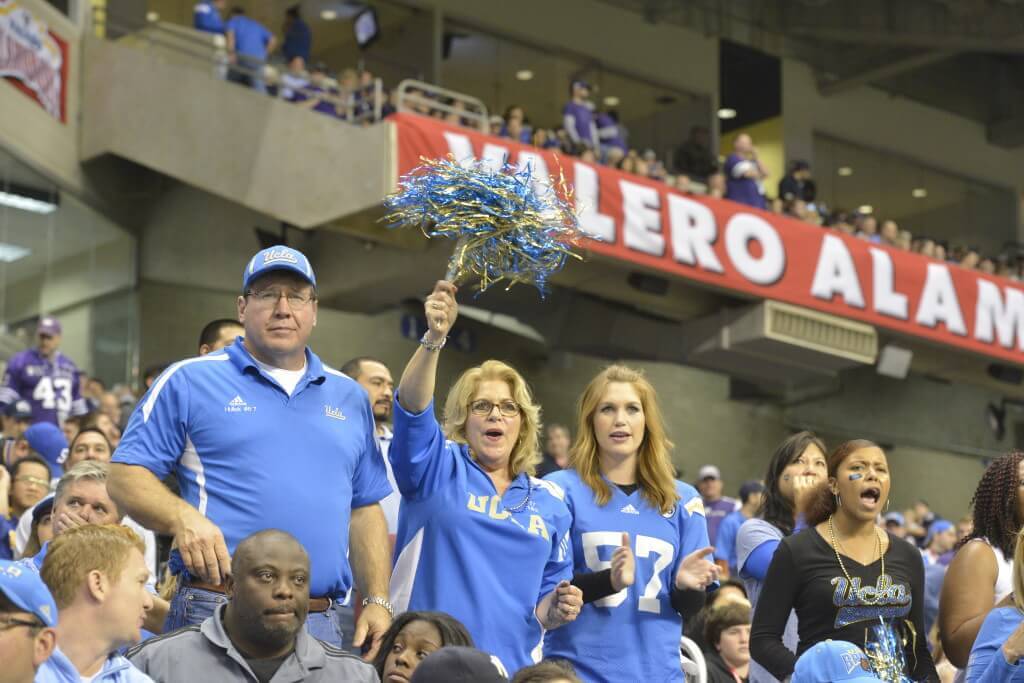 The 2015 Valero Alamo Bowl generated $45.9 million in total economic impact based on direct visitor spending of $26.5 million for San Antonio, according to a survey conducted by Strategic Marketing Services and SportsEconomics.

The 49,580 incremental visitors attending the bowl game from out-of-town between #11 Kansas State and #14 UCLA was the third highest total in Valero Alamo Bowl history and the most visitors in San Antonio for the bowl game since 55,174 attended the 2007 game between Penn State and Texas A&M. The two previous Valero Alamo Bowls (2012 and 2013_ brought 33,580 and 41,560 visitors to San Antonio and delivered total impacts of $40.0 and $32.4 million, respectively.

UCLA beat Kansas State 40-35 in the 2015 Valero Alamo Bowl on January 2 in front of 60,517, the seventh highest total among all of the bowl games. The game was the first Top 15 match-up in Valero Alamo Bowl history and the seventh time in the last 10 where the outcome wasn’t decided until the final minutes.

Since its inception in 1993, the 22 Valero Alamo Bowls have combined to generate direct visitor spending of $430.6 million and an estimated total impact of more than $710 million for San Antonio.

“The success of the Valero Alamo Bowl has paved the way for the city hosting other events that benefit San Antonio’s economic cycle of visitation,” said Michael Sawaya, Director-Convention and Sports Facilities, City of San Antonio. “Each year the Valero Alamo Bowl adds to San Antonio’s well-deserved reputation for being an ideal host for major sporting events and validates the City’s commitment to supporting the Alamodome, as we believe it delivers consistently significant returns.”

The impact study also determined that out-of-state visitors stayed an average of two-and-a-half days spending $199 per day. Thirty-nine percent of the out-of-state visitors indicated this was their first trip to San Antonio.  The average household income of this year’s Valero Alamo Bowl attendee was $111,000.

“The Valero Alamo Bowl again provided a huge end of the year boost for our City by drawing a large out-of-city fan base during what is typically a slower time of year,” said Casandra Matej, Executive Director, San Antonio Convention & Visitors Bureau.  “In addition, the game provides tremendous value by exposing San Antonio to nearly six million ESPN viewers each year as well as first-time visitors who become ambassadors of our city after enjoying our seasonable weather and world class, walkable downtown.”

The complete 2015 impact analysis study is available on the Valero Alamo Bowl website through the following link: http://bit.ly/VABImpact2015

About The Bowl
The Valero Alamo Bowl is an annual post-season collegiate game featuring the #1 Big 12 selection and the #1 Pac-12 selection after the College Football Playoff bowls.

In addition the positively impacting the San Antonio economy, the Valero Alamo Bowl also awarded a record number of scholarships at the 2015 Valero Alamo Bowl.  Fifty-five Bexar County high school students were awarded a total of $412,500 to attend the college of their choice. That brings the 15 year scholarship total to 452 students sharing $1.64 million.

The date and kickoff for the Valero Alamo Bowl following the 2015 college football season will be announced by the end of April. Last year’s ticket holder will have the option to renew their tickets in March while new buyers can sign-up to join the Bowl Priority List now at http://bit.ly/BowlPriorityList2015