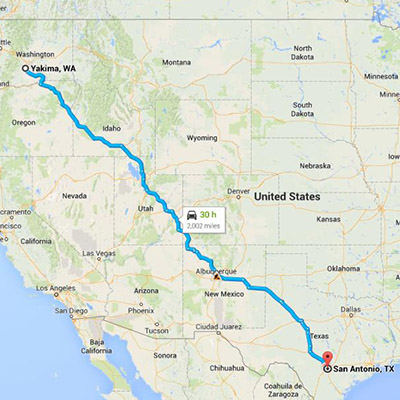 After ten weeks into my internship at the Valero Alamo Bowl I can look back and safely say that this opportunity has brought me a wide variety of experiences that I had never imagined possible. Between the large collection of people that I have met and the variety of places I have been to, one thing has remained constant throughout these ten weeks. The question “How in the world did you end up in Texas?” comes up in every conversation.

As a recent graduate of Washington State University with a degree in sport management, I had come to terms that relocation was an inevitable part of working within the world of sports. Working with the bowl was an opportunity I couldn’t pass up, so I packed my bags, kissed my family goodbye, and made the 2,000 mile journey down to the Lone Star State.

Not really knowing any region of the US besides the Pacific Northwest, I resorted to mainstream media and stereotypes to prepare myself for what was in store down in Texas. The first thing that came to mind was everyone wore a cowboy hat and boots, BBQ was the only food to eat, football was a religion, and the cliché “Everything is bigger down in Texas”.  So far the one that has been the most accurate has been the feverish passion for football.

Coming from a region in Washington where agriculture is the major industry, I felt right at home when first entering Texas through the Panhandle area. Long flat strips of land were covered with corn and wheat. My favorite story to tell people involves one of the first road signs I encountered when entering the state. I found a road that was legitimately called “Ole Dirt Road” but to this day my efforts on Google maps have come up fruitless to find it once again.

Now that I am settled in San Antonio I’ll be giving some of my impressions about general facets of Texas life.

I was lucky enough to be spoiled by a mother who loved to cook authentic Mexican food so when it comes to that, I am very particular. That was until I tried some Tex-Mex flavors! Sorry mom but this stuff is AMAZING. I have yet to find chile rellenos that compare to hers but they have certainly come close.

After eating at a few BBQ places down in Texas it made me realize the deprivation of good BBQ that exists in the Pacific Northwest. It is hard to come by some brisket that melts in your mouth the way that it does down south. Also, the portion sizes of any food are way larger than back home. A small meal is more than enough to satisfy my hunger even on a bad day.

Nobody can argue against football being the powerhouse sport in the state of Texas with the amount of passion that exists from players and spectators alike. Another story I like to tell is when I entered a town with a population of 8,000 people. I would use the phrase “If you blink you’d miss it” if it weren’t for the high school football stadium. I bet every one of those 8,000 residents could comfortably fit in that stadium on a Friday night to cheer on their team. I can say with certainty that it was larger than the one at my high school which had about 1,500 students.

The amount of pride that Texas residents exhibit towards their state has been one of the most unexpected yet unique aspects of the established culture. The flag is waved alongside our nation’s Star-Spangled Banner at every flag pole and the amount of flag-inspired articles of clothing was a lot more than I had expected. People love and are prideful of this state so much that it makes it seem like its own country. However, this has made me feel left out so my search for a pair of Texas swim trunks is still ongoing.

Texas is truly a unique state with its combination of passion, food, and culture that makes me realize why its residents love it so much. I feel like I’ve experienced so much but then I realize how big it truly is! Luckily for me I still have three more months in San Antonio to try to further immerse myself in the distinctive Texas experience.