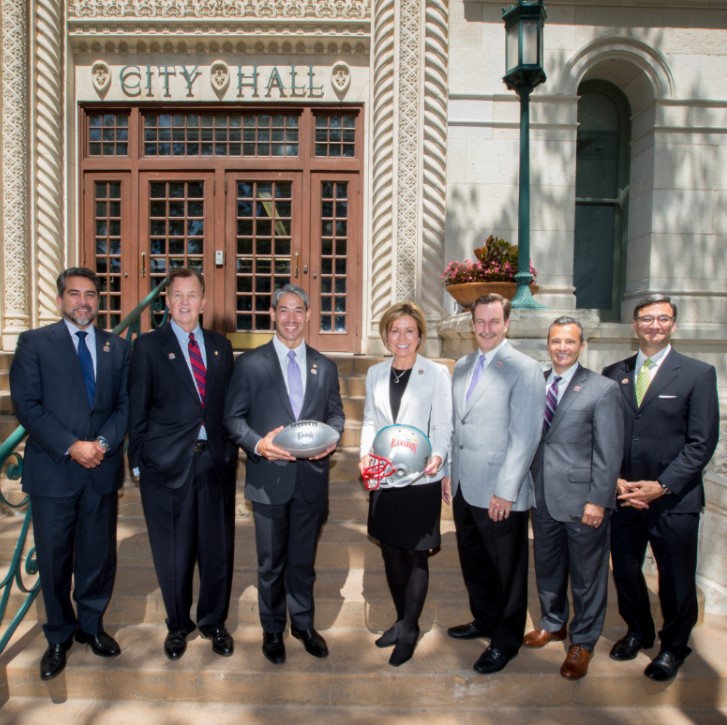 City Council unanimously approved extending a license agreement with the San Antonio Bowl Association, the host organization of the Valero Alamo Bowl, from February 2019 to February 2030 and accepting $6 million for technology upgrades at the Alamodome. This new funding brings the total amount for improvements to the Alamodome to $60 million.

The Alamodome, which is currently undergoing a major improvement project as part of a commitment to host the 2018 NCAA Men’s Final Four Basketball tournament, will utilize the additional funding for an expanded public Wi-Fi system, two additional video screens and sound system upgrades. These enhancements have been identified to significantly improve the fan and attendee experience at the Alamodome.

“We are ecstatic that the San Antonio Bowl Association is investing in the customer experience at the Alamodome to directly affect those attending the Valero Alamo Bowl each year as well as the more than 100 events the facility hosts annually,” said Michael Sawaya, director of the City’s Convention & Sports Facilities Department. “These technological enhancements will also better enable the Alamodome to competitively bid on future marquee national sporting events, including the College Football National Championship.”

The Convention & Sports Facilities Department identified $3 million in the City’s 2017 Mid-Year Budget Adjustment for its Community and Visitors Facilities Fund that, when coupled with $6 million from the Bowl Association, provides $9 million for these additional improvements.

“After last year’s extensions of our ESPN, Big 12 and Pac-12 agreements through the 2025 college football season, our focus became how to best enhance the City’s improvements to the facility to provide the best in-venue experience possible,” said Derrick Fox, president and CEO of the Valero Alamo Bowl. “We are looking forward to unveiling the renovated Alamodome this fall to fans, our participating universities and our patrons as well as parties interested in bringing future neutral site games to San Antonio.”

The San Antonio Bowl Association is the longest-running tenant at the Alamodome. Later this year, the City of San Antonio and the Association will celebrate a decades-long partnership with the 25th Annual Valero Alamo Bowl. The Valero Alamo Bowl has drawn more than 1.4 million spectators since its beginning, and has generated in excess of $484 million in direct economic impact locally.

The Valero Alamo Bowl was created in 1993 to bring enjoyment to South Texans, San Antonians and visitors alike while creating positive economic impact, experiences and national attention for the community and participating universities. Last year’s match-up between #10 Colorado and #12 Oklahoma State was the highest ranked matchup in Valero Alamo Bowl history and the game’s third straight Top 15 matchup. The event delivered a $50.1 million total economic impact for San Antonio from a crowd 59,851, the fifth highest attendance in bowl history for a game featuring two out-of-state teams.

Since its inception, the organization has also served as the local host for 11 neutral site games including last year’s Notre Dame vs. Army game that delivered a $35.4 million total economic impact for San Antonio. The 2017 Valero Alamo Bowl will kick off on Thursday, December 28 at 8 pm.

Diverse, internationally connected and globally competitive, San Antonio has a vibrant culture and economy and is consistently ranked among the fastest-growing cities in the United States. America’s seventh-largest city offers opportunities in industries ranging from bioscience, financial services, aerospace, cybersecurity, energy and transportation manufacturing to healthcare. In 2016, San Antonio was named an All-America City by the National Civic League. We are Military City, USATM, home to crucial military commands supported by a patriotic citizenry. We welcome 34.4 million visitors annually who inject $13.6 billion annually into our economy, and UNESCO designated the city’s Spanish colonial missions as a World Heritage Site in 2015. Celebrating its 300th anniversary in 2018, San Antonio is a city with a storied past and an even brighter future. For more information, visit www.sanantonio.gov.