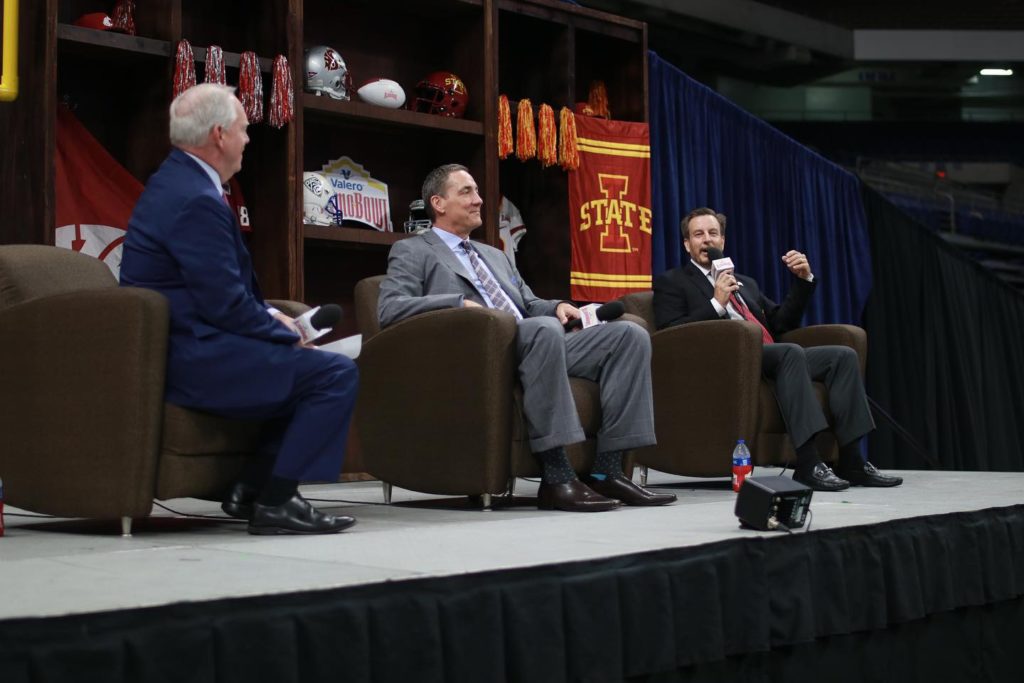 He quarterbacked Penn State from 1981 to 1983 leading the Nittany Lions to a 31-5 record and three bowl wins including a National Championship. Blackledge joined the ESPN team in 2006 and along with Sean McDonough and Holly Rowe will broadcast this Saturday’s Texas A&M at Clemson game.

Below are highlights from Blackledge’s appearance at the event. To hear even more from Wednesday’s panel, watch the full video below.

Q: While Oregon and Washington are ranked the highest in both preseason polls, the Pac-12 media poll voted Utah as the clear favorite to win the conference. What makes Utah such a threat?

A: “There are a couple of things that people really like about Utah. First, the side of the conference they play on is not as challenging or demanding as the other side. Secondly, they have their best running back and their quarterback back. They were injured for part of the year last year and when they were out, they missed a step on offense. The thing that has most people excited about Utah is their defensive front. Their defensive line is outstanding. That’s really the strength and backbone of that team and I think that is why people really like Utah’s chances to win the league.”

Q: The LSU at Texas game on September 7 is one of the hottest tickets of the entire college football season. What do you expect from that match-up?

A: “It’s going to be a great football game. LSU has always been an outstanding defensive football team. Grant Delpit at their free safety is one of the best players in America, they will challenge Texas with their defensive strength. Similar to what Georgia had last year, but I think LSU is maybe even better defensively than Georgia was, and Georgia was not at full strength defensively in that Sugar Bowl. However, offensively is where I think LSU is different than they have been the last couple of years and that’s because there have been so many transfer quarterbacks in college football. That has become the new craze right now. One of those guys last year was Joe Burrow who left Ohio State, went to LSU, became the starter last year and is back for a second year. I think he has elevated their offensive productivity. So, that’s going to be a really, really interesting game.”

Q: Last year’s Valero Alamo Bowl featured some controversial targeting calls and ejections against Iowa State. What can you tell us about the updates they made to that rule?

A: “Well there is a change that I think is going to be significant. Every targeting foul is reviewed upstairs. What’s different this year is there will no longer be the ruling that a call stands as called. So, it either has to be completely confirmed that it was targeting with all the things you look for in targeting, or it gets overturned. I think that will probably end up being better. The worst thing that can happen, and the thing that nobody wants to see, is a kid get ejected from the game and then you look at it again, or see it the next day, and you say, ‘That really shouldn’t have been a targeting call. He shouldn’t have been ejected from the game.’ It could be a penalty, alright. It could be a personal foul, ok. It could be a late hit, but if it is not clearly targeting, let’s not penalize a kid by taking him off the football field in the middle of a game. I think they will be better at that this year.”

Q: How has your approach as a broadcaster changed since your first game?

A: “I think the biggest thing is that I am just so much more comfortable with who I am. I think the key to being a good broadcaster is to be true to yourself, be who you are and allow your personality, whatever that is, to come through. You want to make the audience feel like you are involving them in a conversation about the game. It is a three-and-a-half-hour conversation with the audience, and it takes time to get comfortable doing that. I feel like I have worked really hard at my craft and ultimately for an analyst, we are charged with breaking down the game…I don’t want to speak in a way that only college coaches or players understand what I’m saying, so answer the question why and say it in a way that everyone can understand.”

Q: This season is the 150th anniversary of college football. Do you have a favorite memory watching a game as you were growing up?

A: “I grew up around the game. The game has been part of my life. My dad was a coach for 40 years. He coached in high school, then in college and in the last 16 years, he was an offensive line coach in the NFL. When he was coaching in college at the University of Kentucky, it was a time when I was in middle school, a very impressionable time in my life. I was a ball boy on the sideline, and I remember it was the opening home game in either 1974 or 1975, early 70s, and Kentucky was playing Alabama… Kentucky scored first in the game, they scored second, they’re winning 14-0. Halftime comes and it is 14 to nothing, Kentucky is in front. It is just electric. It is an unbelievable atmosphere believing this is the year that Kentucky finally upsets Alabama. Well, they come out to start the third quarter and opening kickoff a guy named Willie Shelby for Alabama returns it 102 yards for a touchdown, so now it’s 14-7. They battle through the third quarter. Kentucky is still playing well but you can start to tell that they  are starting to wear down. Alabama is playing a lot more players than Kentucky. They score towards the end of the third quarter tying the game. When the third quarter ended and they were getting ready to start the 4th quarter I remember seeing something, and this was the very first time I ever saw it, now you see it a lot at all levels. Every player on the Alabama team, on the sideline, on the field, all the managers, all the trainers, they all stood there and held up four fingers. They didn’t taunt, they didn’t say anything, they just stood there and held up four fingers as they were changing ends of the field. I’m standing there on the sideline as a 13-year old and realizing that they’re sending a message. It doesn’t matter what has happened for the first three quarters. It doesn’t matter how well you’ve played. This is when all the money is on the table, this is when games are won or lost, and this is when Alabama wins. Sure enough, they came back scored two touchdowns in the fourth quarter and won the game 28-14. That four fingers burned an impression into my mind that has really been a life lesson ever since. You play until it’s over. As long as there is time on the clock, you still have a chance to win and you still have a chance to play your best at the end.”

Join us at our next event! The Valero Alamo Bowl Million Dollar Shootout presented by Ticket City will take place on October 11-20.