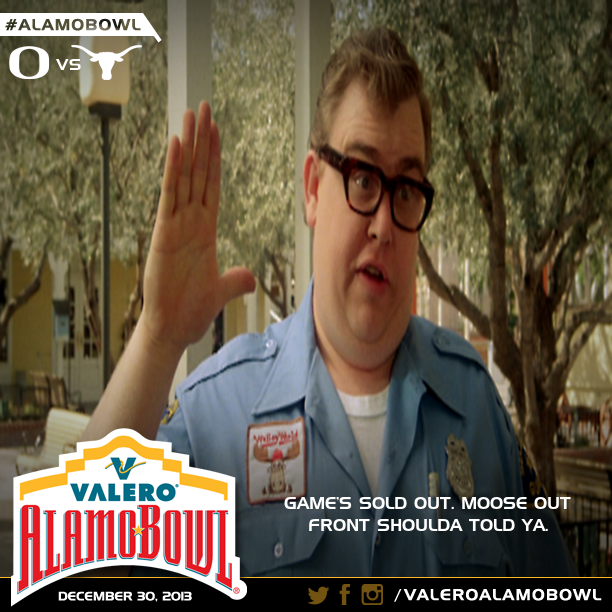 “After celebrating our 20th anniversary last year, we pledged the next 20 Valero Alamo Bowls would be even more memorable and impactful” said Derrick Fox, Valero Alamo Bowl President/CEO. “Thanks to the tremendous fan following of Oregon and Texas coupled with the support of our title sponsor Valero this year’s game will feature one our largest crowds of all-time.”

Both universities have sold their entire allotments and Valero purchased the remaining 220 seats for a San Antonio Food Bank fund-raiser.

These donated tickets will be available at San Antonio Food Bank office at 5200 W Old US Highway 90 tomorrow (Tuesday, December 24) at 10 a.m. for a minimum cash donation of $60 per ticket.

Since every $1 donated to the San Antonio Food Bank can be turned into 7 meals, the goal is to turn the Valero Alamo Bowl tickets into 100,000 meals for those in need in the San Antonio community.

Tickets are limited to four per person, available on a first-come, first-served basis, and only cash will be taken onsite.

About Valero Alamo Bowl
Established in 1993, the Valero Alamo Bowl is an annual post-season collegiate game between the Big 12 and Pac-12 conferences played in the 65,000 seat Alamodome located in downtown San Antonio, the seventh largest city in the United States. The Valero Alamo Bowl has produced five of the Top 15 Most-Watched Non-BCS Bowl Games in ESPN history including the #1 and #2 most-watched games (Texas Tech vs. Michigan State on January 2, 2010 and Texas vs. Iowa on December 30, 2006, respectively) in terms of household impressions. For more information, the bowl’s website is www.alamobowl.com and uses /valeroalamobowl on its social channels.

About Valero:
Valero Energy Corporation, through its subsidiaries, is an international manufacturer and marketer of transportation fuels, other petrochemical products and power. An Alamo Bowl partner since the game’s inception, Valero became the bowl’s title sponsor in 2007 and extended that partnership through the 2019 game this Fall. Valero subsidiaries employ approximately 10,500 people, and assets include 16 petroleum refineries with a combined throughput capacity of approximately 3 million barrels per day, 10 ethanol plants with a combined production capacity of 1.2 billion gallons per year, a 50-megawatt wind farm, and renewable diesel production from a joint venture. More than 7,300 outlets carry the Valero, Diamond Shamrock, Shamrock and Beacon brands in the United States and the Caribbean; Ultramar in Canada; and Texaco in the United Kingdom and Ireland. Valero is a Fortune 500 company based in San Antonio. Please visit www.valero.com for more information.