At the end of the 1st quarter of last year’s Valero Alamo Bowl, 55 high school seniors from Bexar County stepped onto the field to receive $7,500 scholarships. Two of the 55 winners received full rides and decided to forgo our scholarship, opening the door for two replacements.

The two new recipients were in for quite a surprise.

Robin Franklin of Antonian High School and Brianna Cathey of Alamo Heights High School were told that in order to receive the scholarship, they must interview with the Valero Alamo Bowl Scholarship Committee first. Unsuspecting of what awaited them, Franklin and Cathey arrived at the Valero Alamo Bowl office, resumes in hand, geared up for what they thought was a very important interview.

Upon entering the board room, Robin and Brianna didn’t find men and women in suits. Instead, they found the Valero Alamo Bowl staff, confetti poppers, and a $7,500 check for receiving the scholarship.

In order to receive the scholarships, Robin, Brianna, and the other winners had to be ranked in the top 15% of their class or have an SAT score of 1250 (math, critical reading) or ACT score of 28. They were awarded the scholarships based on academic achievement, teacher recommendations, evaluation of extracurricular activities, and honors and awards received. 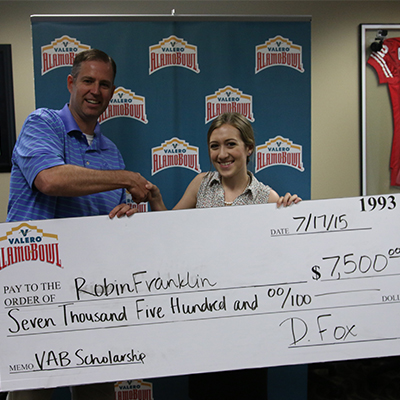