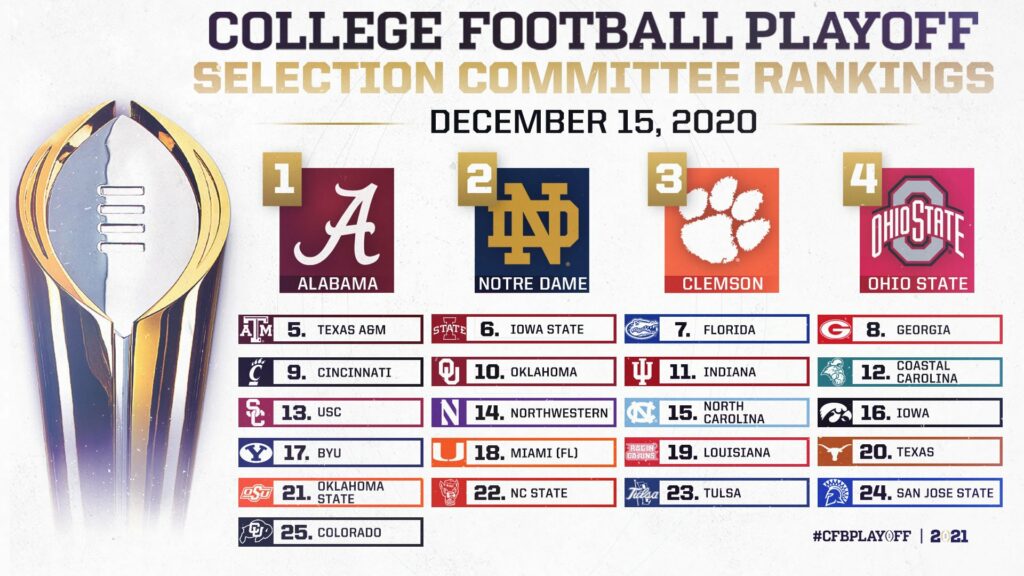 Last night College Football Playoff Selection Committee released their last edition of the rankings before the final go around on Sunday at 11 a.m. CT.

Both the Big 12 and the Pac-12 had their top dogs make moves up the polls this week, with the remainder of the conferences staying put to leave a lot of teams in the mix for the Alamo Bowl.

Remember, the Valero Alamo Bowl will feature the #1 selections from the Pac-12 and Big 12 conferences after the College Football Playoff selections. These rankings will play a factor in deciding who will be playing in the Alamodome on December 29th at 8:00 pm!

Top 10 Teams Square off In Arlington
This Saturday the #6 Iowa State Cyclones will face off with the #10 Oklahoma Sooners for the right to be called champions of the Big 12. Iowa State is looking for its first ever Big 12 title while Oklahoma will be looking to claim its sixth in a row and thirteenth overall.

The Cyclones have moved up in each edition of the rankings, going from #13 to #6 where they sit now and leap frogging Oklahoma in the process. While it might seem a long shot now, their remains the possibility with a couple of losses ahead of them that the boys from Ames could find themselves sneaking into a CFP Semifinal game with an impressive performance on Saturday.

The Sooners have now moved into the top 10 for the first time this year, extending their streak of top 10 appearances to six years

Men in Orange
#20 Texas and #21 Oklahoma State continue to hold true in this week’s edition and both remain in play to be in the Alamobowl. Both teams are inactive this week, but could see themselves move around with many of the teams around them active.

Trojans Bear the Torch
The USC Trojans continue to rise to the top of the crop in the Pac-12, as they climb to #13 in this weeks rankings. The rest of the Pac-12 continues to beat itself up, with #25 Colorado clinging on to a spot in the top 25 after a loss to Utah over the weekend.

USC was slated to take on Washington this weekend in the Pac-12 Championship Game, but the Huskies Covid problems will keep them out of the champ game this year. Oregon will instead take their spot and give the Trojans one last test before the final CFP selection. USC faithful will wonder what more they have to do to earn their own top 10 spot, as they sit undefeated at 5-0 heading in to the weekend.

If the Shoe Fits
Arguably the biggest question mark of this week’s release comes with the ranking of the Florida Gators, who only dropped one spot despite losing at home to unranked and reeling LSU. The #7 Gators lost on a last second, heartbreaking field goal to pick up their second loss of the season.

Follow that up with two-loss Georgia moving above undefeated Cincinnati and it seems that strength of schedule continues to hold strong sway with the committee this year.

Rankings Reaction from around the Country