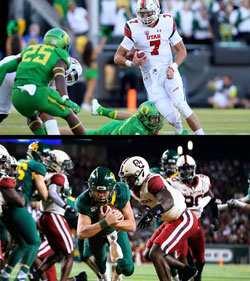 If you have been watching ESPN this week, the most heated championship game discussions involve the Big 12 and Pac-12 given their implications for the College Football Playoff, New Year’s Six Bowl Games and subsequently the Valero Alamo Bowl.

Tuesday’s final regular season CFP ranking slotted Utah, Oklahoma and Baylor at 5, 6, and 7, respectively. With these picks, the CFP committee has set up these three teams for an opportunity to slide into the #4 playoff spot with a win this weekend.

While all Media Projections predict the Top 3 of Ohio State, LSU and Clemson as virtual locks into their playoff spots, media have the fourth spot currently occupied by Georgia as up for grabs.

A Georgia win in the SEC Championship would probably only shuffle to Top 4 rankings, while a loss to LSU on Saturday night would probably drop them out of contention for a national championship.

First up is the Pac-12 Championship game on Friday night. A Utah win over #13 Oregon would give the Utes serious consideration for that #4 slot. If that happens, Oregon and USC would go to the Rose and Valero Alamo bowls.

A Utah loss, on the other hand, would knock them out of the playoff and Rose Bowl, but it could keep them in the New Year’s Six games as an at-large selection for the Cotton Bowl against the highest ranked Group of Five school. Typically, the at-large picks are ranked in the Top 10.

In that scenario, USC would be headed to San Antonio.

Competing with Utah and Georgia for the most likely open playoff slot is the winner of the Big-12 Championship Saturday afternoon. If Oklahoma or Baylor wins and is not in Top 4, they will go the Sugar Bowl. The loser would be available to the Valero Alamo Bowl unless the CFP slots them in the Cotton Bowl as an at-large pick.

Also available to the Valero Alamo Bowl, if the Big 12 puts one or two in CFP games, will be Iowa State, Kansas State, #25 Oklahoma State or Texas.

The Valero Alamo Bowl averages a #13 ranking for its two teams in the CFP era. What will 2019 bring?

A scenario exists where the two teams most media are projecting as the #4 playoff team, Utah and Oklahoma, could be playing each other in San Antonio. That’s unlikely as it would take wins from Georgia, Oregon and Baylor as well as a SEC or Big Ten team to the Cotton Bowl as their at-large selection.

While that probably won’t happened, this year’s Championship Game viewership is sure to set some records. Moreover, history tells us there will be an unexpected result so grab your popcorn!