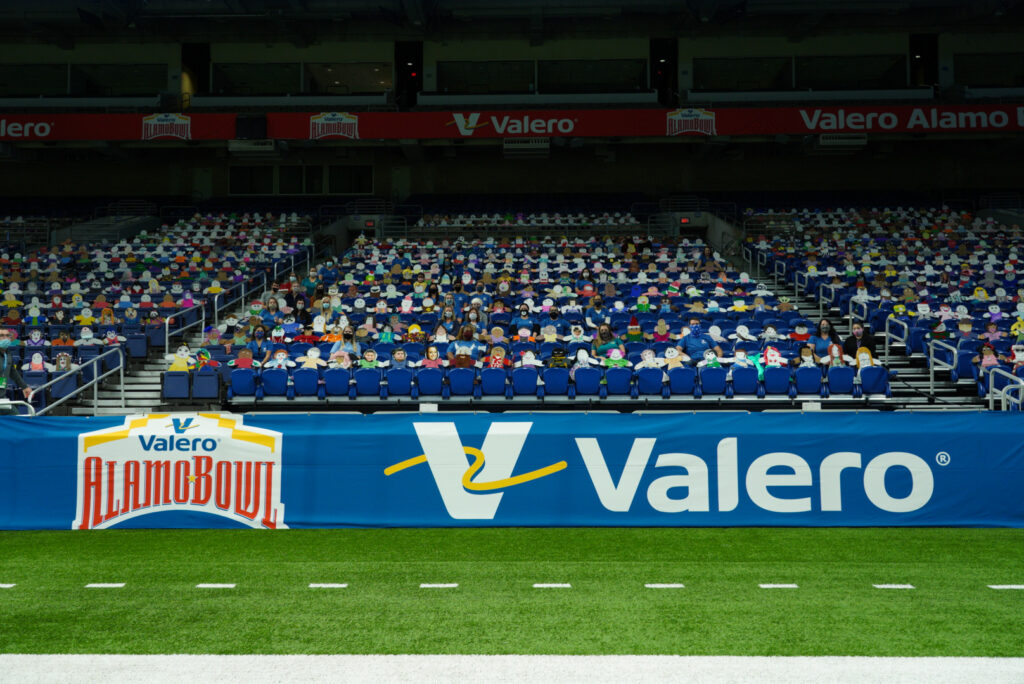 Over 1,500 Cardboard Kids will watch the 2020 Valero Alamo Bowl from the north endzone as part of a child abuse awareness and prevention campaign created by San Antonio community agency, ChildSafe.

Sponsored by Valero Energy Foundation, the campaign is a reminder for each of us to speak up and say something if we suspect a child or teen is being abused.

The most important part of a difficult conversation is starting one and that is especially true when talking about child abuse. In 2019, there were 5,867 confirmed cases of child abuse and neglect in San Antonio and surrounding Bexar County. And while that number is staggering, it is just as shocking to learn that only 1 in 10 sexually abused children ever report it, leaving nine others to keep a terrible secret.

That is why in 2014, ChildSafe created Cardboard Kids, a citywide public awareness campaign to draw attention to the pervasiveness of child abuse and the fact that every story is different and every child unique. Cardboard Kids are more than cardboard figures; they represent the thousands of children who are abused and neglected at the hands of adults in our community each year.

Cardboard Kids start the conversation, not only by creating a visual symbol for children to identify with, but also by providing valuable tips for caregivers on how to talk to their children about child abuse and neglect.

What began with 5,800 cutouts, has grown into a campaign of more than 120,000 decorated Cardboard Kids displayed across San Antonio every April, which is National Child Abuse Prevention Month.

Valero Energy Foundation has been the sole sponsor of Cardboard Kids, enabling the campaign’s exponential growth and heightened awareness about child abuse. Valero’s investment allows ChildSafe to provide advanced care to young survivors and prevent abuse from happening to other children through our community awareness and education programs, helping us break the intergenerational cycle of abuse.

Valero’s support allows ChildSafe to continue our work with multidisciplinary partners to ensure children are safe and perpetrators are prosecuted and unable to hurt another child.

Cardboard Kids distribution begins in March, and decorated cutouts will be placed all over Bexar County on “Reveal Day,” Thursday, April 1, 2021.

To learn how you can support ChildSafe and the Cardboard Kids visit: www.childsafe-sa.org/cardboardkids.