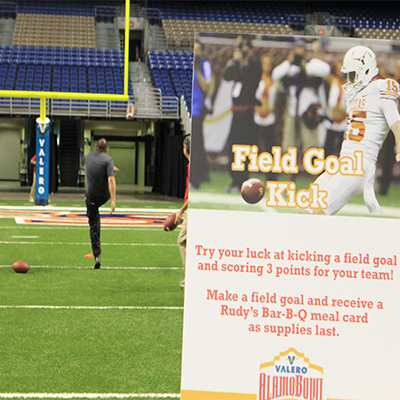 The 2016-2017 college football season is closing in, and San Antonio is ready to celebrate its arrival with the Rudy’s Bar-B-Q Pigskin Preview. The annual luncheon will take place Wednesday, August 31 at the Alamodome, with doors opening at 11:00 am and the program kicking off at noon. Over 700 college football fans and local business leaders will be on hand to ring in what is sure to be an exciting season.

Guests of this year’s luncheon will get to show their football skills on the turf, competing in pass catching drills, field goal kicks, vertical jump, and the tailgating classic: cornhole. The Pepsi trucks will also be on hand for fans, which include a sampling van of Pepsi products, as well as a video game trailer. Fans will enjoy a program that previews the Big 12 and Pac-12 conference football seasons, and hear stories and insight from not one, but two guest panelists from ESPN: college football analyst Todd Blackledge and sideline reporter Holly Rowe.

A standout quarterback at Penn State, Blackledge led the Nittany Lions to the 1982 national championship, and took home the Davey O’Brien Award as the nation’s most outstanding quarterback. Blackledge would go on to play for the Kansas City Chiefs and Pittsburgh Steelers before joining the broadcast booth in 1994. In 2006, Blackledge moved into his current role with ESPN’s Saturday primetime college football series alongside Holly Rowe.

A broadcast journalist since the early 1990s, Rowe has enjoyed a career across a wide spectrum of sports, covering everything from the Little League World Series to the Women’s World Cup. A Utah graduate, Rowe has worked for multiple media outlets in the greater Salt Lake area, including Brigham Young University, and the WNBA’s Utah Starzz, who now play in San Antonio. Rowe joined ESPN on a full-time basis in 1998, primarily as a sideline reporter for college football, men’s college basketball, and softball.

Luncheon guests will be treated to a meal courtesy of “The Original” Rudy’s Bar-B-Q, a commemorative t-shirt, and the opportunity to win a host of raffle prizes, including a Yeti cooler, an Ultimate Valero Alamo Bowl Experience package, autographed footballs—including one signed by 2016 Valero Alamo Bowl MVP Bram Kohlhausen—and more.