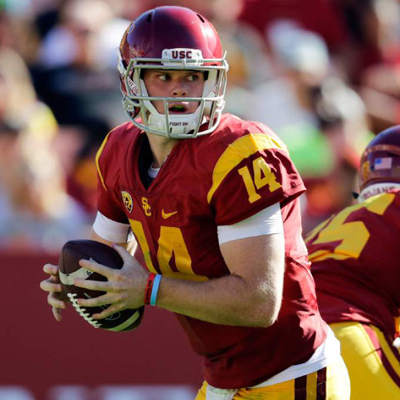 College Football Watchlist: Who to Keep an Eye on This Season

It’s finally August, which means college football begins this month! This gives you permission to officially break out all your tailgating essentials and get fired up about your favorite teams if you haven’t already.

As always, there are new and returning faces in the Big 12 and Pac-12 that you should keep your eye on this season, and we have you covered. After-all, you never know who you’ll be watching play in the Valero Alamo Bowl on December 28th.

A panel of analysts, writers, and Insiders from ESPN made their votes in head-to-head matchups and these are the results:

#2 Sam Darnold (USC, QB, Sophomore): The reigning Rose Bowl MVP proved to be a standout quarterback in college football last season, averaging 237.4 passing yards per game and completing 31 passing touchdowns. The sophomore quarterback is one of the main reasons why the Trojans are a national title contender this year.

#3 Baker Mayfield (Oklahoma, QB, Senior): Mayfield enters his senior season with 27 career wins and back-to-back top-four Heisman finishes. His speed and 71 percent passing percentage make him one of the most dominant passers in college football.

#14 Jake Browning (Washington, QB, Junior): After leading the Huskies to the College Football Playoffs last season and earning Pac-12 Offensive Player of the year, Browning is expected to lead the Huskies’ dominant offense to another successful season. The junior quarterback threw for 3,430 yards with 43 touchdowns last season.

#16 Josh Rosen (UCLA, QB, Junior): As one of the most talented quarterbacks in college football, Rosen enters this season hoping to bounce back from a season-ending shoulder injury. Despite UCLA’s struggles to win last season, Rosen has 33 career touchdowns and is a top NFL prospect.

#34 Luke Falk (Washington State, QB, Senior): WSU’s air raid offense has worked in Falk’s favor as he threw 4,468 passing yards last season, the third-most in the country, and averaged 343.7 passing yards. The senior quarterback enters the season with 89 career touchdown passes and is on track to break the Pac-12 record (116).

#35 Ronald Jones II (USC, RB, Junior): The junior running back is known for his explosive speed, rushing 1,082 yards and completing 12 rushing touchdowns last season. His overall offensive game has flourished over the past two seasons and is only getting better as his college career continues.

#39 Orlando Brown (Oklahoma, OT, Junior): The reigning Offensive Lineman of the Year enters the season with big expectations. After losing several key players on offense, Brown is projected to hold down Oklahoma’s offensive line, which is one of the best in the country.

#43 Royce Freeman (Oregon, RB, Senior): Injuries plagued the running back last season, but he’s expected to return in full force for the Ducks’ offense this season. Freeman scored three touchdowns for Oregon in the triple overtime Valero Alamo Bowl in 2016, and rushed for over 1,800 yards with 17 touchdowns during the 2015 season.

#45 Lowell Lotulelei (Utah, DT, Senior): Lotulelei recorded 3.5 sacks and 28 tackles last season. With his older brother playing in the NFL for the Carolina Panthers, the senior tackle has high expectations but is a star in his own right on defense.

#47 Myles Gaskin (Washington, RB, Junior): Gaskin tallied over 1,300 rushing yards in back-to-back seasons with 24 rushing touchdowns throughout his career. After helping lead Washington to a College Football Playoff last season, Gaskin is expected to be a key component to the Huskies’ offense, which is among the nation’s best.