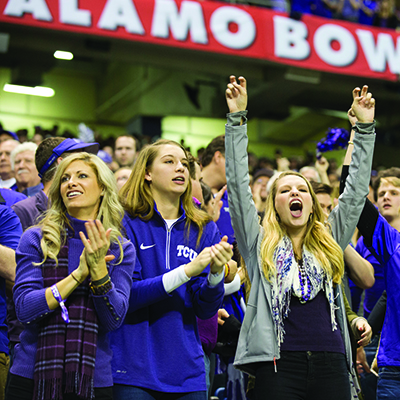 Dog days of summer got you down? The end is in sight! Believe it or not, college football is just two weeks away. Football fans will be treated to a special game to kick off this college football season, when Hawaii and Cal take a trip Down Under to open the season on August 26 in Sydney, Australia. The following weekend the action really gets underway with a few marquee matchups including #9 Notre Dame at Texas, #1 Alabama vs. #17 USC and #3 Oklahoma vs. #13 Houston to name a few.

Coupled with Big 12 and Pac-12 Media Days last month, preparation and predictions for the 2016-2017 college football season are in full swing. The Amway Preseason Coaches Poll features four Big 12 teams, including 2016 Big 12 conference champion favorite #3 Oklahoma, last year’s Valero Alamo Bowl champion #14 TCU, #19 Oklahoma State, along with #21 Baylor. Representing the Pac-12 in the Top 25 is #7 Stanford, which media members selected as the preseason favorite to win the Pac-12 title. Joining Stanford in the Top 25 is #17 USC and #18 Washington, while last year’s Valero Alamo Bowl participant Oregon comes in at #22, followed by #24 UCLA.

Meanwhile, it’s never too early to keep an eye on which team will be playing in the Alamodome on Thursday, December 29. A number of media outlets have released this year’s bowl projections including picks for the 2016 Valero Alamo Bowl. SB Nation slotted Texas to take on USC in this year’s Valero Alamo Bowl, while the National Football Post picked the Trojans to play Oklahoma State. Last year’s Valero Alamo Bowl champion TCU is Athlon Sports’ favorite to return to the Alamo City to face Stanford, while CBS Sports bowl expert Jerry Palm tabbed Baylor and UCLA to play in the Valero Alamo Bowl. ESPN college football duo Mark Schlabach and Brett McMurphy both selected Oklahoma State, while Schlabach picked USC and McMurphy UCLA to emerge from the Pac-12 side.

With the addition of the Notre Dame Shamrock Series, featuring the #9 Fighting Irish against Army, and this year’s Top 25 Valero Alamo Bowl showdown, it’s sure to be another unforgettable year in the Alamodome.