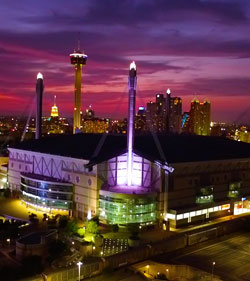 Located in downtown San Antonio, the Alamodome is a five-minute walk from the River Walk and its 10,500-plus hotel rooms. Unique in its design and versatility, the Alamodome has a cable-suspended roof, a retractable seating system and a flexible floor grid.

For 2020, the Alamodome will spend more than $11 million to replace seating in the lower rows of the Plaza Level (the 100 level). The new seats will be padded and include cup holders.

As the longest-running tenant at the Alamodome, the Valero Alamo Bowl has drawn more than 1.56 million spectators since its inception and has generated in excess of $915 million in total economic impact for the City of San Antonio. The Bowl has contributed over $113 million to higher education through team and conference payouts over the past 27 years.

In addition to hosting the Valero Alamo Bowl and other NCAA events, the UTSA Roadrunners of Conference USA have played their home games in the Alamodome since 2011.