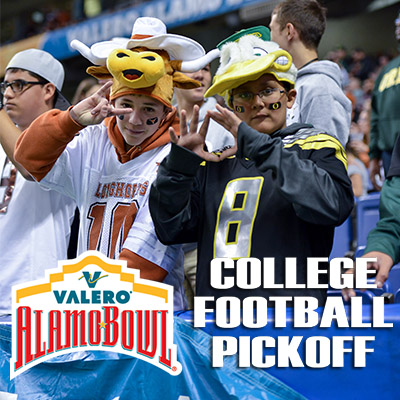 Don’t miss your chance to win!

It’s never too late to start playing the popular Valero Alamo Bowl College Football Pick-Off Contest! Week 7 winner, Travis Gray, shared that he started playing around week four when he saw the promotion while watching the nightly news on WOAI Channel 4. Persistence could also be the key. Take for example our week 9 winner, Jim Rose, who has been actively playing since the first week of the competition.

We asked Gray to share his game winning strategy on conquering the Valero Alamo Bowl College Football Pick Off contest. “Seeing that there is an auto-pick for the fan favorite, I decided to pick one or two upsets a week with the really close games,” Gray said. When it comes to the tie-breaker pick, where you predict the score of the game, Gray said that it didn’t hurt that he is, “pretty much a genius”, but he said that he made the most educated guess he could by looking back on previous team performances in the season.

On the other hand, Rose took to another strategy by letting his eleven-year-old son (a die hard sports lover) pick the winner of the teams each week.

“He motivated me to start playing, since he was upset he couldn’t go see Oregon play last year at the Alamo Bowl,” Rose said. “He makes picks based on what his heart wants, so I log on and make some changes after him on what the reality will most likely be.”

This January, Gray and Rose will be sitting in two prime lower level seats at the Valero Alamo Bowl and adorn pre and post game sideline passes. Gray is most excited about being able to be on the sidelines, and having the opportunity to see the inside workings of the game.”I’ve been to three Valero Alamo Bowl’s in the past and my favorite was the high scoring game of Baylor vs. Washington.”

When we asked Gray who he would like to see in this year’s Valero Alamo Bowl match-up he said, “Being a Texas Alumni he would love to see his team back for a third year, but realistically he’s hoping to see Arizona State come to the Alamodome, January 2nd.” Rose respectfully disagreed and stated, “I would love to have Oregon back since my son is a huge ducks fan, and we weren’t able to make it last year. But I am excited to bring my son to his first college football bowl game and I’m confident we will have a top level match-up again this year.”

There are still three weeks left to play, which means there are three pairs of Valero Alamo Bowl tickets and sideline passes up for grabs. Click here for your chance to be this weeks winner!