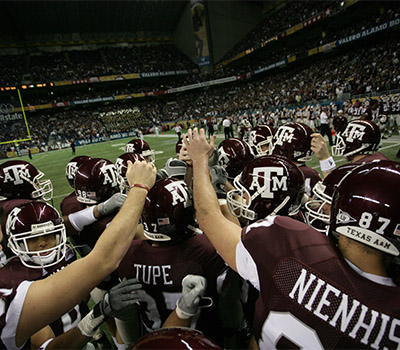 The Valero Alamo Bowl’s high retention rate of option ticket holders is driven by capacity crowds and exciting games between top ranked teams. Our staff continually strives to provide the ultimate fan experience along with the best customer service.

We also like to reward those individuals whose continuing support keeps this one of the largest events in San Antonio by offering incentives to renew. Four sideline passes to this season’s game was the grand prize and Bradley Lile, a passionate football fan from Kingsville, Texas, was this year’s early renewal winner!

Bradley has been coming to the Valero Alamo Bowl since 2007, when Penn State squared off against Texas A&M. However, he is no stranger to bowl games and has been actively going to at least one every year since the Holiday Bowl in 2000. College football is where his passion lies, as he stated that he doesn’t watch professional football very much but is very active rooting for his Texas teams each and every Saturday.

His favorite Valero Alamo Bowl memory was attending the 2011 game featuring Robert Griffin III and the Baylor Bears against the Washington Huskies. “The offensive firepower in that game was amazing; it was non-stop scoring the whole game and a joy to watch. Being able to witness the Heisman winner at his best was truly something memorable.”
The four tickets he renews are occupied by a variety of people. Typically he comes with three friends but it depends on the matchup to decide who he brings along. Bradley has been seen a lot of football in many different places so what keeps him coming back to the bowl every year? “The atmosphere in the downtown area surrounding the dome is incredible, the fact that all the action and all the people are in the same area is great.” Bradley also mentioned the ease of renewing and the ability to pick his seats online make it a hassle-free process.

So who would he like to see in this season’s game? “TCU would be great to watch with their great team but I wouldn’t mind if they made it into the playoff either. Every year the Valero Alamo Bowl is a competitive game regardless of the teams but I would love to see a team from Texas make it.”

Because of Bradley’s continuing loyalty, he will be celebrating with the winning team on the sidelines after the game. “I’m really looking forward to it, it should be fun!” If you are not an option ticket holder, you may miss out on the chance to experience this and other fun rewards in the future. It pays to renew early, so enjoy the game and make sure you renew in February 2015!