The wide open field is largely a result of the unknown one or two Big 12 and Pac-12 teams being selected to play in CFP games.

While the Conference Championship games on Saturday, December 7 will clear up some of that drama, the teams that will be available for the Valero Alamo Bowl still won’t be known until mid-afternoon on Selection Sunday.

What we do know is for the last 10 years, Fleming’s Steakhouse has been the gracious host of our Team Announcement Party.

In addition to networking, drinks and shrimp as big as your fist, Bowl partners will be among the first to learn this year’s Top 25 match-up and have a front row seat to a press conference featuring the head coaches from the two participating teams.

To get involved in this event or the other memorable December events culminating with the Valero Alamo Bowl on December 31 at 6:30 p.m, please call 210-704-6666 or email premium@alamobowl.com.

You can also click here for your chance to win two passes to join the fun at this year’s Fleming’s Steakhouse Team Announcement Party and help us celebrate this year’s Top 25 match-up. 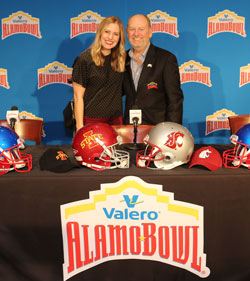