The Alamodome is excited to host you for the Valero Alamo Bowl.

Located in downtown San Antonio, the Alamodome is walkable from world renowned attractions like the Alamo and the newly expanded River Walk as well as over 10,500 hotel rooms and 25,000 parking spots.

As a testament to downtown’s compact footprint, several bowl participants have made the 8 minute walk from the team hotel to the game for their Valero Alamo Bowl appearances.

Before heading to the game, please read the Alamodome’s Clear Bag Policy.  If your bag is larger than 5.5″x 8.5,” it needs to be in a clear bag as defined on the Alamodome website.

All concession stands are cashless. Here is a list of food and drink options in the Alamodome by level:

Fan Assistance
Text “ALAMO” (space) then your issue and location to 69050 to report any game day concerns.

Guest Services booths are in the main entrance of the North and South Plazas. To retrieve lost and found items after the game, call 210-207-3663.

First aid areas are located on the Plaza level near sections 112, 134 and 141. WI-FI INFORMATION Connect to the “Alamodome Guest” network for free Wi-Fi use inside of the Alamodome 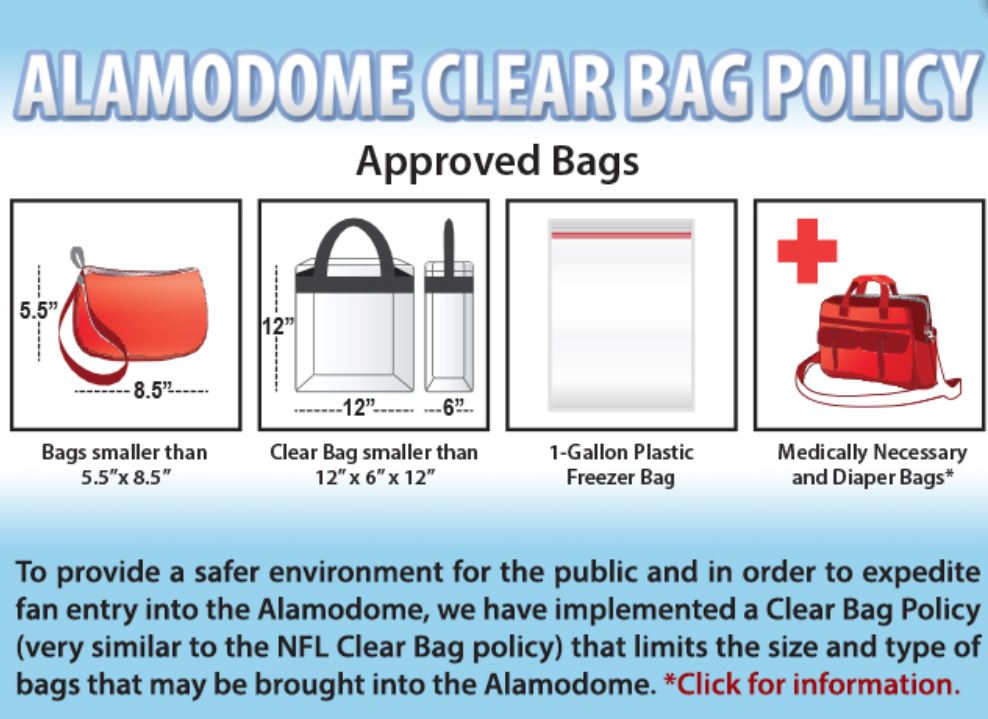 Cameras: Cameras are allowed as long as they do not disrupt the view of others.

Built as an extension to the neighboring convention center, the Alamodome has more meeting space per square foot than any other football stadium in North America which provides versatility and flexibility. The facility has also made significant improvements the last five years including a new home team locker room, DAS/Wi-Fi networks and an AstroTurf playing surface as well as an expanded north plaza entrance and a new 20,000+ square foot multi-purpose room.

The newest renovations included doubling the size of the concourses and LED ribbon boards as well as installing new larger HD videowalls in all four corners of the stadium and improving Wi-Fi throughout the Dome. These improvements are being funded through a $6 million donation from the Valero Alamo Bowl as well as user fees. The Valero Alamo Bowl will combine to contribute fees as well as generate the Alamodome rent for the stadium, suites and parking lots along with concessions and merchandise commissions.

In addition to hosting the Valero Alamo Bowl, the 65,000 seat Alamodome is also home to the UTSA Roadrunners of Conference USA.

The Valero Alamo Bowl has also served as the local host for 11 neutral site college football games in the Alamodome including three Big 12 Football Championships (1997, 1999 and 2007) as well as the Texas A&M vs. Army game in 2006 and two Notre Dame Shamrock Series games (against Washington State in 2009 and Army in 2016).

Get Your Tickets Now

Don't miss your chance to make unforgettable memories at this year's game and ancillary events.

No city lays out better for major events than San Antonio. Explore everything our city has to offer.