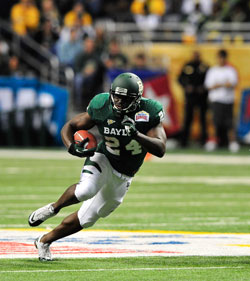 Games to Watch in Week 13

This week’s biggest game in the Big 12 will be the Baylor Bears vs. the Texas Longhorns. After Baylor’s heartbreaking loss against #9 Oklahoma last week their quest for an undefeated season came to an end. Even though their perfect record no longer stands, they still have plenty to prove in their upcoming battle against a 6-4 Texas. The Longhorns are also bouncing back from a close game against Iowa State where they lost by just two points. If Baylor can win this Saturday’s game, they are heading to the Big 12 Championship where they might have a chance to even the score with a win against Oklahoma. A Longhorn win this Saturday could set them up for a potential appearance in the Big 12 Championship. Texas is 78-26-4 all-time against Baylor and their last trip to Waco in 2017 secured them a commanding 31-point victory.

In the Pac-12 this week all eyes will be on the USC vs.UCLA match-up at the Los Angeles Memorial Coliseum. In the 92nd year of this rivalry USC holds a 47-32-7 record again UCLA. USC, currently in second place in the Pac-12 South has won four of its last five games including a 41-17 blowout last weekend against Cal. The Trojans have earned a #23 ranking in the CFP Top 25 and a win this week against UCLA will solidify their place among the best in the Pac-12. UCLA’s did not fare as well in week 12 after a 49-3 loss against #7 Utah. UCLA needs to win their remaining two games to become bowl eligible so they will be highly motivated to get the win on Saturday.

All times are CT