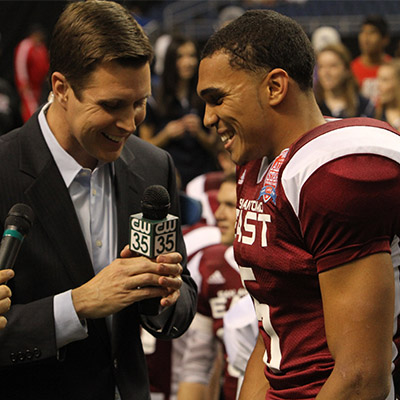 Gridiron All Stars to Shine

One-hundred student athletes representing 50 high schools have been chosen for the San Antonio Sports All-Star Football Game, presented by H-E-B, which will showcase top local high school players in a game following the 2015 U.S. Army All-American Bowl on Saturday, Jan. 3, 2015 in the Alamodome.  In the battle of East vs. West, the area’s top senior players will take the field at 4:30 p.m. after the best in the country kick-off at 12 noon.

One ticket serves as admission for both the U.S. Army All-American Bowl and the San Antonio Sports All-Star Football Game presented by H-E-B.  Tickets are available at the Alamodome Box Office and through Ticketmaster.com for $15 (general admission) and $30 (reserved).

Reagan High School’s David Wetzel will coach the East, and John Campbell, from Brandeis High School, will coach the West.  Players were nominated by their high school coaches and chosen by a selection committee. More than 40 were named to All-District teams last year.

The San Antonio Sports All-Star Football Game, presented by H-E-B, will feature players that are committed to play for some of the top universities in the country as well as players looking for an additional chance to impress college scouts with potential scholarships to offer. Thirty-three seniors who were in last year’s All-Star Game went on to play college football.