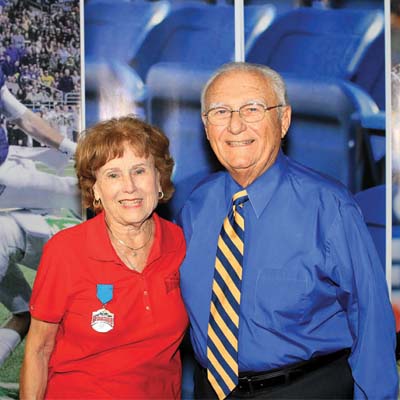 The Leader of the Band – Al Sturchio

You might know Al Sturchio as the former trumpet-playing bandleader of “The Sound of the Spurs”, which performed at Spurs games in HemisFair Arena, but he’s also the band-leading mastermind who has coordinated the needs of university bands playing at the Valero Alamo Bowl games since the game began.

From tracking down broken drum replacements with minutes to spare, to racing teams from the airport to river barge performances, Al has been an invaluable ambassador for San Antonio and a behind-the-scenes hero in helping the Valero Alamo Bowl be successful year after year.

“I’ve been working with the Valero Alamo Bowl since it started. The evolution of the game has been a show all its own—and I’ve loved being a part of it. San Antonio puts on a top caliber program on par with and even beyond what other destinations produce. There’s a lot that goes into it and even more that comes out of it.”

Having moved to San Antonio in the 1940s, Al has seen the growth of not only the Valero Alamo Bowl but also what San Antonio has to offer.

“The Valero Alamo Bowl in and of itself has brought San Antonio closer to the people of the United States. Think about all the teams we’ve hosted over the years. Each game has connected us to those communities. This game is one of our city’s biggest attributes in bringing tourists to San Antonio because people travel for football. It’s really something to see that all of their travelling has helped grown this great city’s tourism infrastructure. Now just as important as those tangible improvements are the ones we sometimes never see, like how this game has impacted kids and families for 25 years. Think about every player, every band member who has come through San Antonio because of this game: their experience at the dome, in the city, with the food. They take so much home with them.”

In fact, Al loves the game so much that he and his wife Janice usually celebrate their wedding anniversary on game day. “We spend most of our anniversaries at the Valero Alamo Bowl, just as we will this year when we celebrate our 64th anniversary. It’s become a part of our lives. Besides, it’s pretty neat to have your anniversary on a day that’s a celebration for the whole city.”