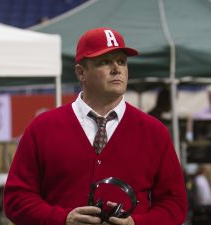 Skelton, an offensive coordinator for East Central High School, was introduced to the lime light when the production of My All-American, a feature film based on the 1969 Texas National Championship team, came to the Alamodome in late June. The film stars Golden Globe nominated actor Aaron Eckhart, who plays Darrell K. Royal, and writer and director Angelo Pizzo.

Originally figured to be casted in a backup role as an Arkansas coach, Skelton quickly learned that he would play former Arkansas Head Coach Frank Broyles in the controversial “Game of the Century” between Texas and Arkansas.

“I just sent in a couple of pictures of me actually coaching and they called back and said, “yeah, you can be an Arkansas coach”, but they didn’t say specifically which one,’ Skelton said.

“I went into wardrobe and they asked, ““Which one of you is the head guy?””, and we all didn’t know so she looked on the casting list and it said that I was. The rest is pretty much history.”

Initially the role of Frank Broyles was a non-speaking part. That was before Skelton impressed Pizzo with his authentic sideline demeanor.

“Once I started arguing with the damn official, one of the sound guys tipped off Pizzo saying, “hey you might want to get this guy mic’d up,” Skelton said. “Who would have thought arguing with a referee would have made my break.”

As it would turn out, the official that Skelton argued with on set, Gary Booth, was actually an official he had dealt with on Friday nights coaching for various high schools in the San Antonio area.

Skelton’s familiarity with the game of football and his coaching background helped him overcome his lack of previous acting experience, and also helped the star of the film in an unexpected way.

“Eckhart actually told me to continue to do what I do even though I’m not on film necessarily, because he was studying my gestures, my body language and where I was standing relative to the huddle,” Skelton said.

Because of his increased roll in the film, Skelton received additional perks while on set, including a personal trailer and access to the higher-quality food that was on set, such as shrimp kabobs and ribs.

When asked if he could have a future in acting, Skelton said, “If it hits again, it hits again.” He also noted that he has been receiving information from acting schools across the country.

For now though, Skelton is focused on the upcoming Texas high school football season and looking forward to reclaiming his title as the Tailgate King of the Valero Alamo Bowl on January 2.

Each year Skelton puts on the B/Skelly Tailgate at the Valero Alamo Bowl where he and his partners cook more than 400 pounds of meat for nearly 1,500 college football fans using his 2,200-pound, duel-axel bar-b-que pit. This year’s bowl game will be the sixth consecutive year for the parking lot party and the 22nd year Skelton has attended the game.

“I’ve been to every Alamo Bowl, every year,” Skelton said. “I remember sitting way up at the top and now it has progressed to where I am now. I remember when RG3 (Robert Griffin III) was here a few years ago against Washington, that was pretty cool. Anytime you can have a Heisman winning guy come into town that is a pretty special deal.”

“All in all, it is always a pretty awesome experience that showcases San Antonio.”