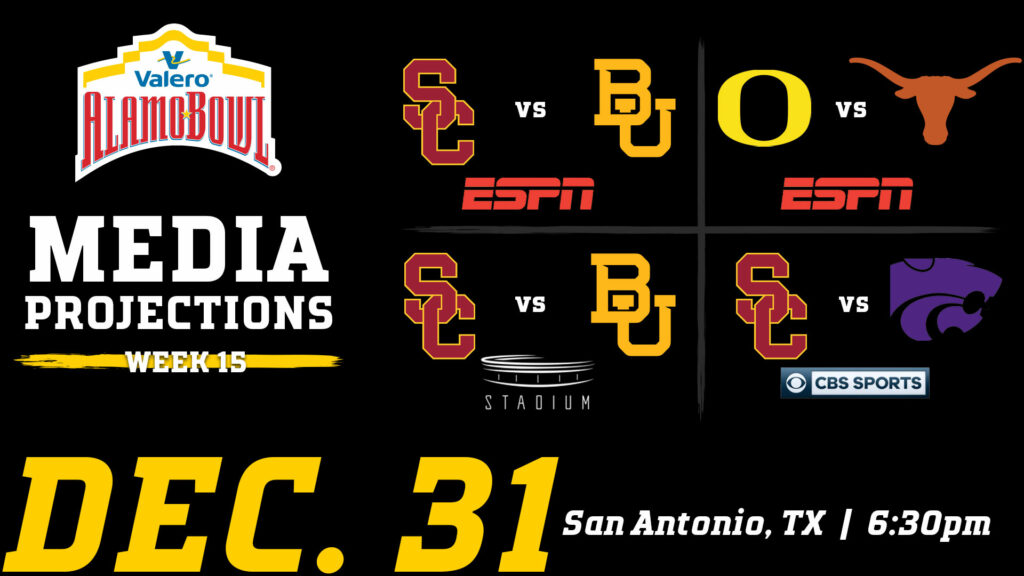 The Media Projections after results in Week 14 competition have remained consistent with some new teams in the mix.

Did any media member get it right?

In the annual Whataburger Pick the Teams Contest you voted for who you believe will be spending New Year’s Eve in San Antonio.

Check out the two most popular match ups:

To help you guess this year’s match-up, consider these numbers:

14: The average school ranking for a Valero Alamo Bowl participant the last 5 years.

11: The average number of wins for the Valero Alamo Bowl Champion the last five years.

Remember this is the sixth straight year Valero Alamo Bowl will feature the #1 selections from the Pac-12 and Big 12 conferences after the College Football Playoff selections.

For 2019, the winners of the Pac-12 and Big 12 Championship games will head to the Rose and Sugar bowls, respectively, unless they finish ranked in the Top 4 of the final CFP Poll. Then they will move to a semifinal game and the second-place team will move into their normal Rose or Sugar bowl slot.

The Cotton Bowl could also host a Pac-12 or Big 12 team as an at-large selection by the CFP this year to play the highest ranked Group of 5 teams. This is a possibility especially if a highly ranked Big 12 or Pac-12 loses its Championship game and stays in the Top 10 in the final CFP rankings.