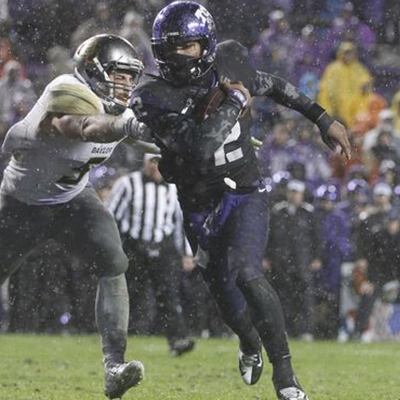 College football certainly provided fans with a November to Remember, but the postseason is far from set as we head into Week #14. The Valero Alamo Bowl field of teams is narrowing by the week, but with one slate of games still left to play this year’s teams won’t be known until 4 p.m. CST on Sunday, December 6.

Click here to get your tickets to this year’s Valero Alamo Bowl!

The Horned Frogs finished their regular season with their biggest win of the year, knocking off #12 Baylor 28-21 in 2/OT. It was an unusually low-scoring game for two of the top offenses in the nation. Amon G. Carter Stadium was pelted with cold, driving rain for much of the night, making it tough for both offenses to move down the field. At the end of the night, it was TCU’s Trevone Boykin making the difference once again, as his two touchdowns in the overtime sessions sealed the deal for the Horned Frogs. Freshman linebacker Ty Summers, a San Antonio native and graduate of Reagan High School, was named Big 12 Defensive Player of the Week after recording a school-record 23 tackles, including the game-winning tackle near the goal line on the final play of the game.

With the win, TCU reached the 10 win mark for the sixth time in the last eight years and the 10th time in the past 14 seasons under Patterson. Prior to his arrival on campus in 1998, TCU had just four 10-win seasons in its history.

Oregon continued their winning ways but not without a tough battle at home from their in-state rivals Oregon State. After taking a 31-7 lead into halftime, the Beavers found a way to claw back to within 10, but ultimately were bested by the Ducks 52-42. Quarterback Vernon Adams Jr. and wide receiver Bralon Addison were in sync yet again, as they connected eight times for a total of three touchdowns. Running back Royce Freeman showed why he’s one of the best backs in the country, compiling 218 total yards and two touchdowns. Freeman is third in the nation in rushing and is one of three running backs in the country with 1,700+ yards. The other two? Derrick Henry of Alabama and Leonard Fournette of LSU.

Pac-12 Championship: #20 USC (8-4) at #7 Stanford (10-2) – 6:45 P.M. CST, FOX: Stanford topped Notre Dame last week on a game-winning field goal from Conrad Ukropina, but senior quarterback Kevin Hogan stole the show. In his final game on Senior Day, Hogan threw for four touchdowns and 269 yards on 17 completions. They’ll try to thwart upset-minded USC on Saturday, a Trojan squad who bested inner-city rival UCLA 40-21. This was USC’s first win against UCLA in three years and the win came in large part to USC’s three defensive takeaways. After starting off the year 3-3, the Trojans finished the year winning five out of their last six to clinch a spot in the Pac-12 title game at Levi’s Stadium in Santa Clara. They’ll be led on the sidelines by newly-promoted Head Coach Clay Helton, who led the Trojans to a 5-2 record as interim Head Coach this year.

Texas (4-7) at #12 Baylor (9-2) – 11:00 A.M. CST, ESPN: Despite a close loss this past weekend on the road, Baylor still has a chance to grab a spot in a CFP game with a win at home vs. Texas on Saturday. With 58 yards on the ground last week, running back Shock Linwood moved into 2nd place on Baylor’s single-season rushing yards list with 1,298. He’s 249 yards away from Terrance Ganaway’s school record of 1,547 yards. Ganaway ran for 200 yards in the 2011 Valero Alamo Bowl, a 67-56 win for the Bears. While most are predicting Baylor to easily handle the Longhorns at home, Art Briles and company should keep in mind that Texas has a knack for pulling off upsets in big-time games.

#3 Oklahoma (11-1) is the Big 12 Champion and all media projections have them securing a spot in the CFP Semifinals.  If this is the case, the Sugar Bowl will fill their Big 12 slot via the conference’s tiebreaker rules as follows: