Friday marks the start of one of the most popular events on the calendar, the Valero Alamo Bowl Million Dollar Shootout presented by TicketCity. For 10 days, more than 1,500 golfers will try their hand at a hole-in-one contest for a chance to win the million dollar grand prize.

There are also many other opportunities to win great prizes. Every shot that lands on the green will win a prize and the 10 closest shots to the hole each day are also awarded wonderful prizes including restaurant and entertainment gift certificates.

From a distance of 125 yards, the top two shots each day will qualify for the finals held on Sunday, October 26th at 6:30 p.m. The first person to make a hole-in-one during the finals will win a million dollars! If no aces are made during the finals then the participant who lands their ball closest to the pin will win a trip for two to the Caribbean, courtesy of American Airlines.

A portion of the proceeds will benefit the Valero Alamo Bowl Scholarship Fund and The First Tee San Antonio. This year we will award a record $412,500 divided up between 55 graduating high school students in Bexar County, up from 35 recipients the year before. In addition to our presenting sponsor, TicketCity, Saturday, October 25th will be declared as Whataburger Day. Come out and try to win Whataburger prizes. 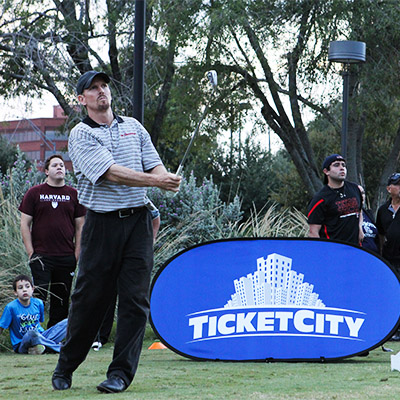