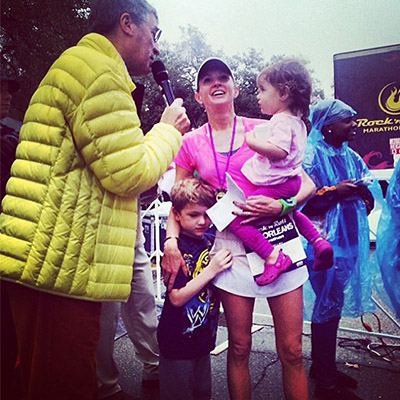 Dr. Andrea Duke is a business owner, mother of two young children, an elite marathon runner and professor at Trinity University and the University of Incarnate Word.

It was her work at Trinity that presented her with an opportunity to add to her already busy schedule.

The result was a Duke-led team of four current and former Trinity students that coordinated and executed behind-the-scenes and grass roots marketing initiatives via social media.

“The most memorable moment was when we got both Oregon and Texas fans, boys and girls, to do their best touchdown dance to win a mini-football helmet with the teams on it,” Duke said. “We filmed it to put on YouTube and there were the cutest little boys from Oregon who broke out in a synchronized dance routine and these boys from Texas doing the ‘John Travolta’. It was a lot of fun seeing the fans get very active.”

Since Duke is joining us again this year, she will be looking forward to leading a new group (two of last year’s members parlayed their experience into full-time events and social media jobs) with expanded responsibilities.

“I am most looking forward to doing some of the same active online activities me and my students are trying to figure out,” said Duke. “What is that new thing to give fans that insider information and more of what they want while trying to be different as a Bowl. We also want to create that connection, that fandom, that it’s not just one game on one night, but rather a month long kind of experience.”

If anyone can handle the pace of December in the bowl world, it is Duke who recently qualified to run in the Olympic Trials race for the marathon.

Duke started running alongside her father at an early age. While attending Georgetown University in pursuit of her master’s degree, she interned at the Pentagon in the media and press room just weeks after 9/11.

“It was stressful for me trying to figure out how to deal with a very high impact situation, while trying to be a poised 21-year-old intern and talk to the Secretary of Defense,” Duke said. “So I decided to pick up running again and I ran my first marathon on March 23, 2002 with my Dad. The moment I crossed the finish line I got the bug.”

This past February, Duke won her first major marathon, the Rock ‘N’ Roll Marathon in New Orleans. Then in October, Duke was accepted into the American Development Program at the Chicago Marathon. The program recognizes the fastest amateur athletes in the Chicago Marathon and supports up-and-coming American marathon runners.

Her hard work paid off as she finished the Chicago Marathon with a time of 2 hours and 41 minutes which qualified her for the Olympic Trials.

“First I cried,” said Duke. “Then I asked, where’s my pizza? Now qualifying for the Olympic Trials showed me what I could do and the abilities I could have.”

Her goal is to qualify for the trails in the A Standard time.

“I took 16 minutes off my last marathon time” said Duke. “That shows me that if I want it bad enough I can get it. Running is a priority because of two reasons; one, I want to do it so I make time for it and two, I have a great support system with my husband and family that understand how important this is for me.”

It is estimated that 150 women will run in the trials. The top five will make it the Olympic team with three running and two alternates.

Here is to a quick recovery from this weekend’s race as the Valero Alamo Bowl has teams to announce and Duke has a social media strategy to execute.