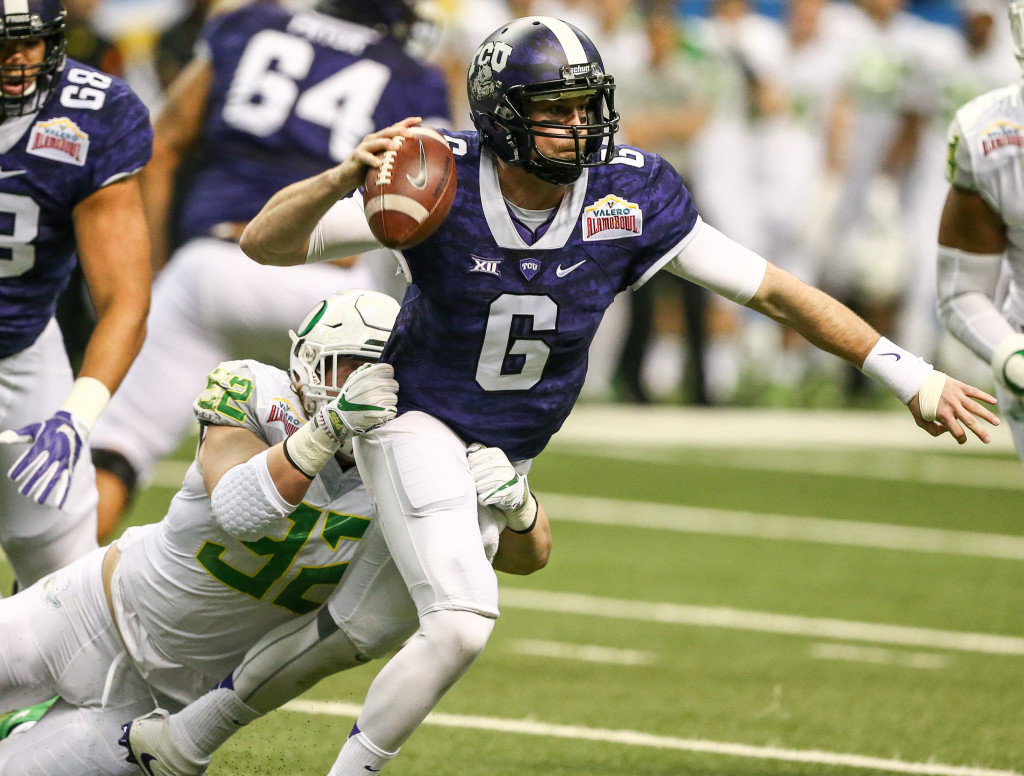 In 8 of the last 10 Valero Alamo Bowls, the outcome of the game has not been decided until the final minutes.

The 2016 Valero Alamo Bowl looked anything but a thrilling finish at halftime with #15 Oregon up 31-0 on #10 TCU. While many of the Horned Frog fans in the sellout crowd wandered the Alamodome during intermission,  TCU Head Coach Gary Patterson exchanged his black TCU polo for a more spirited purple color proving sometimes you just need a change of scenery.

Starting with a Jaden Oberkrom 34-yard field goal a few minutes into the 3rd quarter, TCU made the most dramatic comeback in Valero Alamo Bowl history and tied an NCAA record erasing the 31 point deficit late in the fourth quarter.

Then, TCU scored the first touchdown in overtime to take a 38-31 lead over Oregon. After Oregon star running back (and the Pac-12’s leader rusher) Royce Freeman scored his third touchdown of the game, the teams traded field goals pushing the game into its third overtime.

Valero Alamo Bowl offensive MVP TCU quarterback Bram Kohlhausen ran for an 8-yard touchdown to give TCU a 47-41 lead. On the next series, Oregon’s fourth down pass was batted away by safety Denzel Johnson to secure the win for the Horned Frogs.

Here’s a sampling of what national media had to say about this year’s Valero Alamo Bowl:

Unbelievable way to end my 2015 season of CFB. great reminder why I love the game. never know what you will see any given night #TCUvsORE

Tom Fornelli of CBS Sports ranked this year’s Valero Alamo Bowl as the #1 bowl game of the year, calling it “an absolutely amazing game.”

Pete Fiutak of Campus Insiders called Oregon-TCU as the best bowl game of the season, saying: “This is why you watch bowl games.”

Bill Connelly of SB Nation ranked this year’s Valero Alamo Bowl as the #2 game of the entire 2015-2016 season, calling it “remarkable.”

The national television broadcast  earned a 4.4 overall rating which is the 7th best rating in the Valero Alamo Bowl’s 23 year history and a 29% increase over last year’s rating.

Prior to TCU’s comeback win, FBS teams in bowl games were 0-1,463 when trailing by 31 points and ESPN Stats gave the Horned Frogs a 0.9% of winning at halftime.

CAN I GET AN EXTENSION?

For only the third time in Valero Alamo Bowl history, 60 minutes were not enough to declare a winner as TCU and Oregon went into overtime. The Horned Frogs secured the victory with four touchdowns from quarterback Bram Kohlhausen and stellar second half performance by the TCU defense.