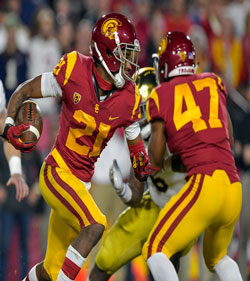 For the first time since 2015, the Pac-12 conference has 6 teams ranked in the AP Top 25 poll.  That means every conference game in Week #4 features a ranked opponent.

The first Pac-12 South matchup of the season is #10 Utah at USC. Utah, the preseason media projection pick to win the Pac-12 Conference title, has lost all eight games played on Trojan turf dating back to 1916.

The Utes have started non-conference play with a 3-0 record making a statement as one of only four teams in the Pac-12 to remain unbeaten along with #24 Arizona State, #23 Cal and #19 Washington State. This matchup gives Utah their first opportunity to prove they are a worthy suitor for the conference title on a national stage.

USC’s Week #3 overtime loss to BYU bumped them out of the Top 25. Three turnovers from freshman QB Kedon Slovis, a scoreless third quarter for both teams and an OT defensive stop gave BYU the edge over USC. A win at home this Friday against the Utes would build strong momentum for their next two games against #22 Washington and #7 Notre Dame.

The Week #4 schedule in the Big 12 conference only includes two conference games: A battle of two first year head coaches whose teams each with 2-1 records in West Virginia and Kansas and then ABC’s Saturday Night Game between Oklahoma State and #12 Texas.

Oklahoma State vs. Texas is annually one of the Big 12’s most entertaining games of the year.

While the Longhorns own a 24-9 series advantage, Oklahoma State has won five straight games over Texas in Austin. The Cowboys also beat the Horns 38-35 last October in Stillwater.

Going into this weekend, Big 12 conference quarterbacks have thrown the fewest interception (12) among all the conferences.

Leading the pack of Big 12 signal callers is Texas’ Sam Ehlinger. The junior has a 177.3 quarterback rating as he has completed 72% of passes for 956 yards, 11 touchdowns and 0 interceptions.