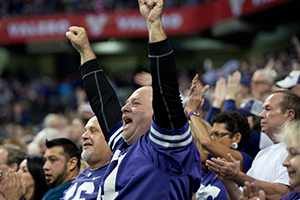 PrimeSport, the leader in providing direct access to the biggest sporting events in the world, announced today a renewed partnership as the Official VIP Hospitality and Travel Package Provider for the 2016 Valero Alamo Bowl.

The 2016 Valero Alamo Bowl will be held on December 29th in San Antonio at the Alamodome. Held annually, the game is one of the nation’s elite bowl games and for the third consecutive year will feature a Top 15 matchup, this year between #12 Oklahoma State and #10 Colorado.

“The competition in the Valero Alamo Bowl always makes for an exciting game and this year will be no exception,” said Andrew Zinberg, Chief Commercial Officer of PrimeSport. “We appreciate the partnership with the Alamo Bowl and are happy that fans will have the opportunity to experience the game through the great packages we offer.”

The Valero Alamo Bowl will kick off on Thursday, December 29 at 8 p.m. CST. Tickets are available at www.alamobowl.com or the Alamodome Box Office.

Both head coaches will be in San Antonio on Thursday, December 8 for a 10:30 a.m. press conference as part of the Valero Alamo Bowl Golf Classic at The Club at Sonterra.