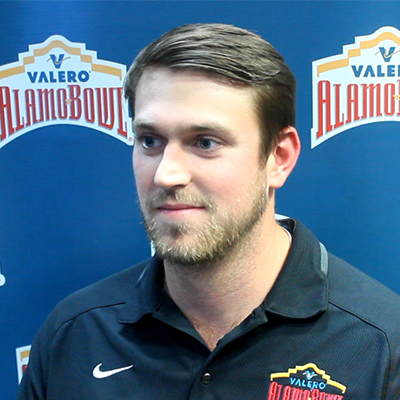 Nine months ago, a capacity crowd filled the Alamodome and witnessed the biggest comeback in NCAA bowl history. After Oregon built a commanding 31-0 lead over TCU at the half, the Horned Frogs mounted a furious second half attack to push the game into overtime.

The rest is history. If you don’t know what happened, ESPN replays the instant classic religiously. King of the comeback, TCU quarterback and Valero Alamo Bowl Offensive MVP Bram Kohlhausen stopped by the bowl offices to shoot a video for TCU Frogs for the Cure honoring his father.

Bram also graciously visited with us reminiscing about the game. Here are the highlights.

“I’m going to get benched. I knew we had talented guys at quarterback on the depth chart, we were down 31-0, what do we have to lose? Let’s go with a freshman who could potentially be the starter next year. I’m going in the locker room thinking, I just ended our season with a loss, I’m getting benched in front of all my family and friends that drove to San Antonio to see me play against a top caliber team, and I blew it. I was sitting there waiting for one of the coaches to come tell me ‘you’re done we’re going with another guy’.”

(Spoiler alert: he didn’t get benched.)

Did you notice Coach Patterson switch shirts at halftime?

“I didn’t notice at all. He does that quite often, he’s a pretty superstitious guy. When we’re getting put down 31-0 I wasn’t surprised that he switched shirts. I didn’t find out until after the game, but that’s the reason we won, Coach P switching shirts. All the credit needs to go to him.”

(Worth noting: Kohlhausen was 28-45 with 351 passing yards and two touchdowns through the air, he also added 45 yards and two scores on the ground.)

Last year’s Valero Alamo Bowl gets replayed a lot, how many times have you watched it?

“I watched it once with some buddies, and it was a lot of fun. Every time it’s on TV I get four or five text messages saying, ‘if you want to relive your glory turn on ESPN’. Apparently, it’s the #5 game on ESPNU’s countdown of 2015 college football, but in my eyes I think it’s #1.”

This game is often cited as a Top 10 best comeback of all time. How does that make you feel?

What were you thinking about after the game?

“First thing that went through my head was, I need to find my family. At every TCU game I knew where they were sitting. My brother, with his sly mouth, talked an Oregon guy into giving him a field pass so my mom could sneak onto the field and find me.”

“It was great, I just wanted to embrace her (my mom), and I knew she was so happy. We had just lost our father in November, I knew she was going through a rough time and to see the emotions on her face, it was probably the best feeling I’ve ever had.”

What’s the one question you get asked the most about the game?

“’What did Coach P said at halftime?’ He didn’t say anything to me. He addressed the team, but I wasn’t in there, I was talking to the offensive coaches. He got on his defense, because it was atypical for the TCU defense to give up 31 points in one half. They quickly changed it around that’s the reason we won the game, they didn’t give up one point in the second half.”

Don’t miss this year’s Valero Alamo Bowl, featuring the #1 Pac-12 and #1 Big 12 teams after the CFP on Thursday, December 29. Buy tickets now before the November 15 price increase for the best selection at the best prices.