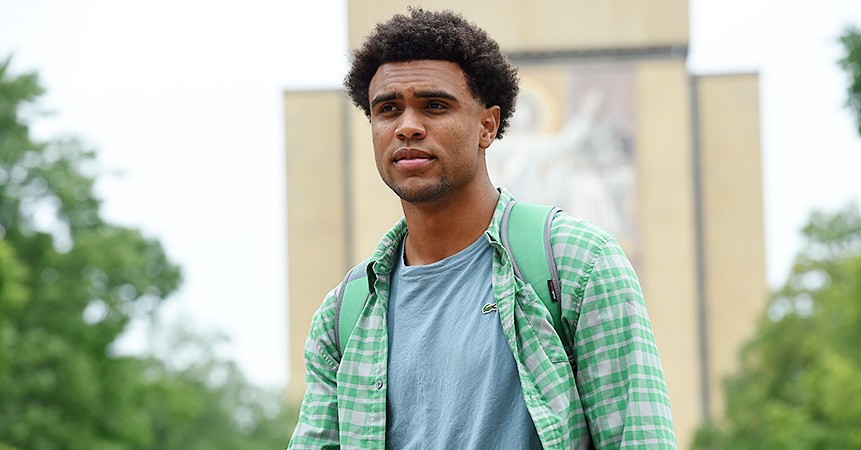 By Ken Rodriguez, The Rivard Report

When Notre Dame signed Corey Robinson to play football, the Fighting Irish thought they’d landed a late-blooming wide receiver who could help them win some games.

The Irish had no idea they were getting a future student body president. A student-athlete who would become the first sophomore in the nation to make Academic All-America since 2008. An enterprising humanitarian who would co-found a non-profit (endorsed by the NCAA) for athletes to donate athletic apparel to children. A missionary who would spend one summer serving the homeless in Brazil, another summer serving the impoverished in South Africa. A Liberal Studies major whom the school would nominate for a Rhodes Scholarship.

When Robinson left San Antonio Christian High School for South Bend, Ind. in 2013, the Irish had no idea they were getting a global visionary who would touch people on three continents – before graduation.

Now here he is, returning to San Antonio this weekend in a role no one imagined. When Notre Dame (3-6) and Army (5-4) kickoff on Saturday at the Alamodome, Robinson will be on the sidelines as a student assistant coach.

Read the full story at the The Rivard Report.

Check out a story from Notre Dame on the return of the Shamrock Series to San Antonio.

6 p.m. Notre Dame Band concert at the Alamo (Free/Open to the Public)