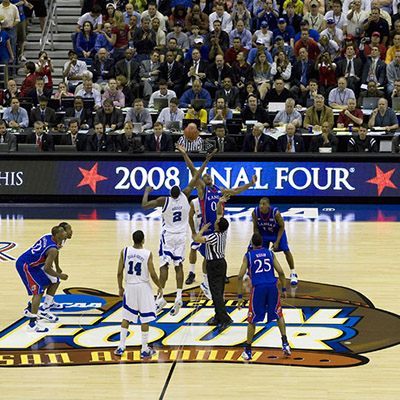 Return of the Final Four

In 2008 Kansas junior Mario Chalmers hit an off-balance three pointer with two seconds in regulation at the Alamodome. The shot sent the NCAA Men’s Championship game to overtime and propelled the Jayhawks to a national title over Memphis.
Friday afternoon the NCAA announced it has awarded San Antonio another Final Four.

Congratulations to the San Antonio Local Organizing Committee on their successful bid that will not only showcase our city and a decade of improvements but also bring Alamodome improvements that will enhance every event.

With the Final Four’s expanded fan fest, outdoor concerts and other ancillary events, the 2018 Final Four will bring one largest events in San Antonio history to town the same year the city celebrates its 300th anniversary.

Lucas Oil Stadium in Indianapolis will be the host for the 2015 Final Four followed by Houston, Phoenix, San Antonio, Minneapolis and Atlanta; respectively before the event returns to Indianapolis in 2021.

To read the San Antonio Express-News story on the announcement, please click here.