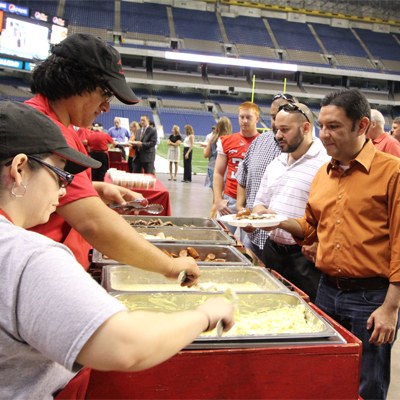 It’s beginning to look a lot like Football Season here in San Antonio, with the Rudy’s Bar-B-Q Pigskin Preview right around the corner. This year, the annual event will take place on Wednesday, August 26th with doors opening at 11:00 am and the luncheon beginning at noon. Over 700 college football fans and local leaders will gather in the Alamodome to officially kickoff football season here in the Alamo City.

Luncheon guests will get a preview of the Big 12 and Pac-12 conference football seasons, a Valero Alamo Bowl Nike t-shirt, and the chance to test their skills on the turf by participating in a receiving drill, field goal kick, and a few friendly games of cornhole. Attendees will also have the opportunity to hear from ESPN College Football Analyst, Robert Smith.

An Ohio State alum, Smith led the program in rushing yards in 1990 and 1992, with a personal-best 1,126 yards in 1990. He averaged 88.4 yards per game and rushed for 18 touchdowns over the course of his college career. After being drafted number 21 overall in the first round of the 1993 NFL Draft by the Minnesota Vikings, Smith’s football flourished. In 1997, Smith burst onto the scene with 1,266 rushing yards. The following season, Smith was named to his first Pro Bowl team after rushing for over 1,000 yards once again. His finest season came in 2000, when he rushed for a career-high 1,521 yards, led the N.F.C. in rushing, scored a career-high ten total touchdowns, made his second Pro Bowl roster, and was named Second-team All-Pro. Smith is second on the Vikings all-time rushing list and holds the NFL record for average yards per touchdown run with 27.2 yards per score.

In addition, guests will be treated to a wonderful meal courtesy of Rudy’s Bar-B-Q, as well as have the chance to win some great Valero Alamo Bowl raffle prizes! This year’s raffle prizes include a GoPro Hero4, a tailgating kit complete with grill, and a Yeti cooler, as well as the shot to win an Ultimate Valero Alamo Bowl Experience package including game tickets, post game passes, admission to the Primesport Kickoff Luncheon, and more. Raffle tickets will be available for purchase at the event for $5 each, or five for $20.

Tickets for the event are $65 per person, and can be purchased here.