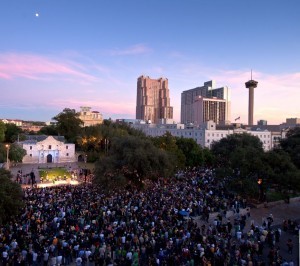 Completing a comprehensive 100+ page bid for San Antonio to serve as the host for the 2017 College Football Championship Game in less than six weeks was a daunting task.

However, the Valero Alamo Bowl had tremendous support from city leadership, the Alamodome and the San Antonio Convention & Visitors Bureau to allow us to hand deliver an aggressive bid to the College Football Playoff Group’s office in Dallas last Friday.

If anyone on the site selection committee attended the 2008 NCAA Men’s Final Four in San Antonio like ESPN’s Dana O’Neil, I think they’d agree with her recent tweet.

The 60+ retweets, along with similar tweets from other national media members, is a testament to San Antonio being one of the nation’s most logistically desirable cities for major sporting events.

To drive that point home to people who have never visited our city, the Valero Alamo Bowl shot this San Antonio Challenge video last year. It shows two tourists going from the airport to their hotel and then walking to five major attractions including the Alamodome all in less than 60 minutes.

However, our bid didn’t focus on the past, our compact downtown or even the value of celebrating college football’s biggest event in a football crazy, centrally located state like Texas. Rather the emphasis was on the amazing transformation happening in our city right now.

San Antonio in 2017 will be a much improved city from the one that hit a home run hosting the 2008 NCAA Men’s Final Four. The River Walk has more than tripled in size and the revitalization of the San Antonio Airport, Convention Center and HemisFair Park will greatly enhance the experience of anyone attending a major event.

The hardest thing to convey in the bid was San Antonio’s momentum as a City On The Rise and how everyone is united behind Mayor Julian Castro to do everything in their power to make the 2017 College Football Championship the biggest event in San Antonio history.

Having one strong city leader over pivotal city departments (Convention and Sports Facilities, Convention and Visitors Bureau, Downtown Operations, Aviation, Downtown Operations Police Department, Emergency Management and Parks) coupled with a first-rate tourism industry that successfully hosts over 28 million visitors each year is the reason San Antonio delivers for major events like the one described in the video below.

Gregg Tally, president of a convention management firm, relays a number of impactful statements, but my favorite line is about how he judges a city by how often he “hears the word no.” Gregg said he never hears that in San Antonio.

If we are fortunate enough host the 2017 College Football Championship Game, I know San Antonio will deliver what College Football Playoff Executive Director Bill Hancock called “a true celebration of college football like nothing we’ve ever had in our game.”