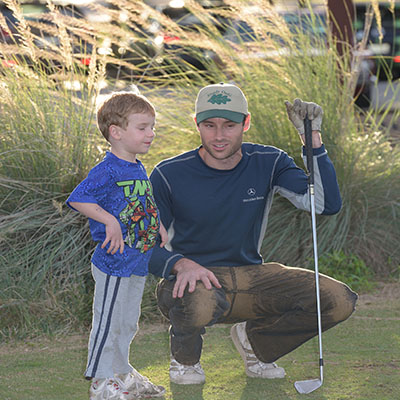 Take a Shot at $1 Million Dollars

October has arrived, and with it comes the return of the Valero Alamo Bowl’s Million Dollar Shootout presented by TicketCity. Hosted at the Polo Field Golf Center at Brackenridge Park, 10:30 a.m. to 6:30 p.m. from October 14th through October 23rd, the hole-in-one tournament is expected to draw more than 1,500 golfers—will you be one of them?

Each day, the two shots that land closest to the hole from 125 yards out will advance to the finals on Sunday, October 23rd. In the final group, the first contestant to sink a hole-in-one will take home the grand prize of $1 million dollars! But they won’t be the only winner during the course of the tournament.

Contestants will have a chance to win prizes with every swing of the club, be it landing their ball on the green, hitting the best shot of the day, or taking home the day’s raffle prize. Prize sponsors of this year’s Shootout include Flemming’s Prime Steakhouse, Paesanos Restaurant Group, Rudy’s Bar-B-Q, Dave & Buster’s, and many more! To see the full list of prize sponsors, click here.

Margaritaville, Whataburger, CiCi’s Pizza, and RockStar will also be on hand as day sponsors for patrons to sample their products.

Proceeds from this year’s Shootout will benefit the Valero Alamo Bowl’s scholarship fund. This year the bowl plans to award over $500,000 in scholarships to area high school seniors.

The action starts in a little over a week. Hit the range this weekend for some practice shots, and get ready to take home $1 million dollars!