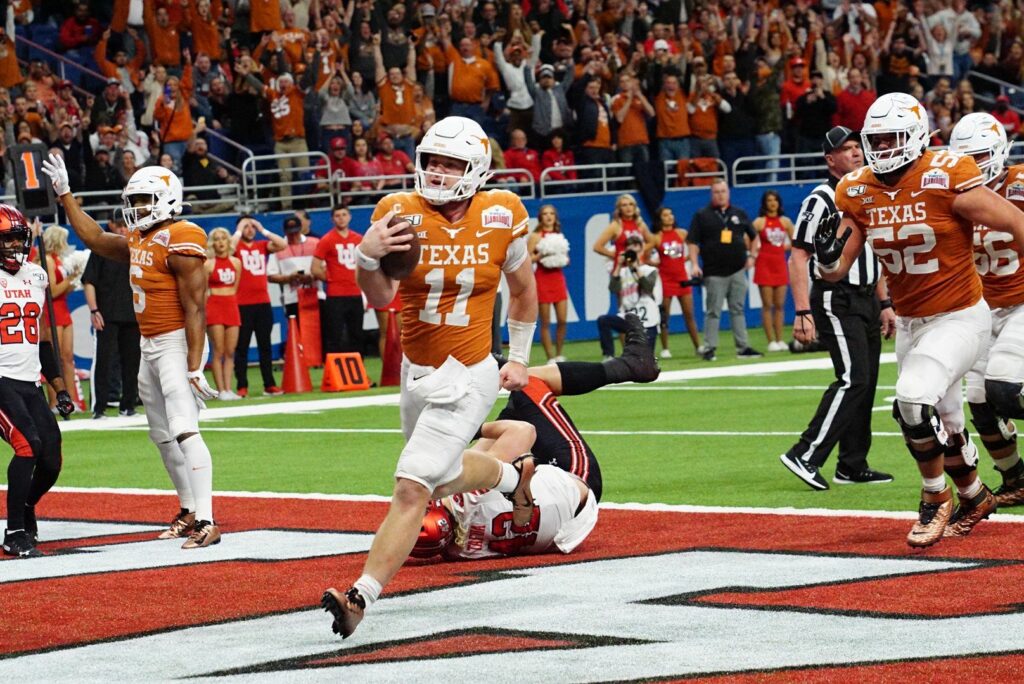 In 2019-20, Valero Alamo Bowl scholarship programs will award $1 million between 139 students representing every San Antonio area high school and four-year university. This amount is the largest local scholarship total among all the bowl games.

The 2019 Valero Alamo Bowl between #11 Utah and Texas was the final game in the first of two six-year agreements to match the Pac-12 and Big 12 conferences’ top teams after the CFP selections. The 6.2 million who watched the broadcast made it the second most-watched non-CFP game in 2019 and #8 most-watched Valero Alamo Bowl of all-time. The total viewership also came within 500,000 viewers of two of the six CFP games.

In addition, the ESPN broadcasts of the six Valero Alamo Bowl games in the CFP era have averaged $4.3 million in exposure value for San Antonio and the Alamodome.

Live Only Happens Once

Utah head coach Kyle Whittingham, the 2019 Dodd Trophy Coach of the Year, came to San Antonio with an 11-2 overall bowl record and a Utes team that boasted the nation’s best run defense and the Pac-12 Offensive Player of the Year in running back Zach Moss.

Texas’ Tom Herman has also excelled in bowl games as his teams won all three previous bowl games. This year the Longhorns had one of nation’s best dual threat quarterbacks in Sam Ehlinger along with All-Big 12 first team receiver Devin Duvernay and an attacking defense.

The result was one of the biggest surprises of bowl season with a 38-10 Texas victory. It was also the second biggest upset in Valero Alamo Bowl history behind unranked Purdue’s 37-34 win over #4 Kansas State. Ironically both the Boilermakers and Longhorns were led by Austin Westlake High School graduates in Drew Brees and Ehlinger, respectively.

A crowd of 60,147 attended the game which was the 3rd highest total of the non-CFP games and surpassed the attendance at two CFP games.  For the first six years of the Valero Alamo Bowl’s Big 12 #1 vs. Pac-12 #1 matchup after CFP selections, the game averaged 93% capacity attendances.

The Texas Longhorns scored on their first drive and never looked back, beating No. 11 Utah 38-10 on Tuesday night to claim the 2019 Valero Alamo Bowl championship.

The Longhorns (8-5) won the toss and started the night’s scoring on their first drive after electing to receive the opening kick. Sam Ehlinger connected with Collin Johnson for a 34-yard gain on the first play, and after a pair of first downs, Texas sophomore kicker Cameron Dicker connected from 29 yards out to put Texas up 3-0.

UT would continue its first-half domination when D’Shawn Jamison returned a punt 71 yards to the Utah 8-yard line. The Horns would follow that play with an Ehlinger 5-yard touchdown pass to Collin Johnson to put Texas up 10-0 early in the game. The touchdown was Ehlinger’s 30th of the season as he became just the second Texas quarterback to throw 30 TDs in a season, joining 2019 Valero Alamo Bowl honorary captain Colt McCoy.

As the Longhorns were driving again and closing in on the Utah goal line, Ehlinger was picked off by Javelin Guidry on 4th down to maintain a 10-0 game heading into the break.

The Utes (11-3) received the kick to begin the second half, but couldn’t get a drive going and were stopped on 4th down. Texas would march down the field quickly and find the end zone again when Keaontay Ingram took an 11-yard pass from Sam Ehlinger into the end zone, putting the Horns up 17.

Down 17-0, Utah would get on the board with 4:58 left in the 3rd quarter after Jadon Redding put a 32-yard field goal through the uprights, cutting the Texas lead to 14.

But the Longhorns wouldn’t take their foot off the gas, marching 75 yards on their way to another score. This time it would be Ehlinger who would call his own number, breaking a tackle and getting into the end zone to extend the lead to 21.

Refusing to go away, the Utes would score again with just under 12 minute left in the game when Demari Simpkins caught a 4-yard pass from Tyler Huntley to get the Utes only touchdown of the night.

UT would finish the night with a pair of touchdowns, one where Ehlinger connected with Devin Duvernay to mark Ehlinger’s fourth touchdown of the night. The Horns would find paydirt one last time when Keaontay Ingram scampered 49 yards down the sideline to cap off a Valero Alamo Bowl championship.

Ehlinger finished 12-of-18 passing for 201 yards, and four total touchdowns en route to offensive MVP honors. He found seven different receivers in the win, including three different ones for touchdowns. Duvernay led the way on the outside, hauling in three catches for 92 yards and a score. Sophomore running back Keaontay Ingram finished with 108 yards on just 13 carries, capped off by his 49-yard score.

Defensively, the Longhorns held Utah to just 10 points, a season-low. Linebacker Joseph Ossai led the team with 9 tackles, including 6 for a loss. Safety Caden Sterns added 8 tackles in the win.

For the Utes, running back Zack Moss became Utah’s all-time all-purpose yards leader on Tuesday night after he ran for 57 yards and added 14 more yards through the air. On the other side of the ball, Bradlee Anae finished with 6 tackles and his half sack in the first quarter made him Utah’s all-time sack leader.

With the win, Texas finishes its season with an 8-5 record, marking the fifth time this decade to hit the 8-win mark. Utah’s year comes to a close at 11-3, the third most wins in school history and most since joining the Pac-12.