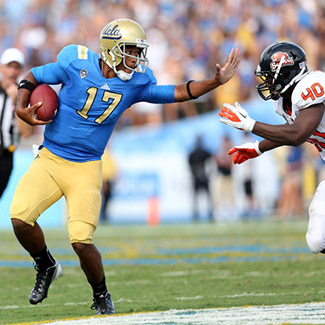 Since the announcement of this year’s college football bowl match-ups plenty of national sports writers and college football analysts have given their opinions on what are the best postseason games this year, and the Valero Alamo Bowl is near the top of most lists.

This year’s game will be the first time in the 22-year history of the Alamo Bowl that the game features two Top 15 teams in #11 Kansas State and #14 UCLA. Both teams will enter the game with identical 9-3 records, with both offenses averaging more than 33 points per game.

Here is what is being said about this year’s Valero Alamo Bowl;

Dr. Saturday/Yahoo Sports: “The best non-New Year’s Six bowl is the Alamo. It’ll be fun to see what Bill Snyder has designed for UCLA QB Brett Hundley and the UCLA offense. And will UCLA have an answer for the combination of Jake Waters and Tyler Lockett? The winner of the game gets to 10 wins on for the second-consecutive season too.”

Mark Schlabach/ESPN.com: The #6 best bowl game “figures to be quarterback Brett Hundley’s last game in a Bruins uniform, as the junior is expected to enter the 2015 NFL draft. Wildcats quarterback Jake Waters also will be playing in his final college contest. Both teams lost their final regular-season game, so both will be motivated to finish on a winning note.”

Stewart Mandel/Fox Sports: The Valero Alamo Bowl is one of “five games you shouldn’t miss…The Wildcats aren’t splashy, but they’re fun to watch. QB Jake Waters doesn’t have nearly the athleticism of counterpart Brett Hundley, but he zips some darts in there.”

Tom Fornelli/CBS Sports: Ranked as #5 match-up among the 38 bowl games, Tom writes: “I am very intrigued by this game. Kansas State had a very nice 9-3 season, but its three losses came against Auburn, TCU and Baylor. Can it finally pick up a win against one of the best teams in the country? As for UCLA, it’s been a confusing team all season, but when it shows up to play it’s very good. I hope both of these teams show up in this game, because if they do it’s going to be good.”

Brandon Huffman/Scout College Football, Fox Sports: The highest ranked combination of teams outside a New Years Six bowl features plenty of star power, Jake Waters and Tyler Lockett for the Wildcats, Brett Hundley and Eric Kendricks for the Bruins, in the Alamodome. Kansas State may have exceeded expectations this year while UCLA came up a bit short, but the winner will have a 10th win to carry into the offseason.