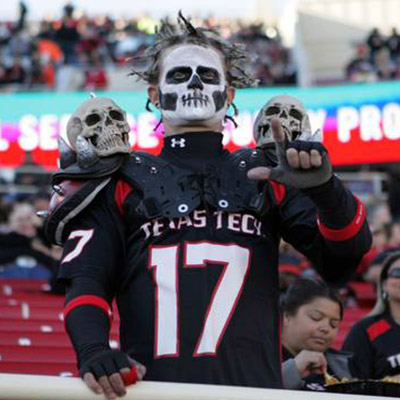 The Valero Alamo Bowl has been fortunate enough to host a wide variety of college football programs with some of the loudest and proudest fans in the entire nation. The heart of this passion lies in each team’s student’s section, whose fervor and emotional devotion embodies the zeal that exists in college football.

Some of the best examples to back this up exist within our conference affiliations, the Big 12 and the Pac-12, where home field advantage can be the deciding factor between a win or a loss. These college football programs are bucking the trend of declining student attendance and have caught our eye during team selection trips.

Arizona
Down in Tucson you can find the wild students of Arizona that comprise the rapidly expanding Zona Zoo. Over 10,000 committed fans make it one the largest and rowdiest places to be on Saturday’s and the recent success of the Wildcat’s program just further adds to it. Players continually consider it the loudest stadium in the Pac-12 and cause headaches for opposing quarterbacks and their offenses.

Kansas State
KSU’s rendition of “The Wabash Cannonball” is one of the best pregame traditions in the country that is proudly belted out by the 9,000+ students that attend the Wildcats’ home games. A sea of Royal Purple stretches from one end zone to the 50-yard line and is conveniently located behind the opposing team’s bench to terrorize and cause raucous in order to give their team every advantage. Wildcats fans have plenty to cheer about with Hall of Fame coach, Bill Snyder, leading one of the best teams in the nation.

Oklahoma State
The OSU Cowboys students begin our top five with the distinct home field advantage they provide through the “Paddle People” that attend each game. The group of nearly 250 students bang large paddles against the padded side walls of Boone Pickens Stadium, causing a menacing atmosphere to opposing teams. So menacing in fact, that the Big 12 conference had to step in and create a rule banning all artificial noise while the offense is at the line of scrimmage. You know you are loud and proud when the conference has to step in to make it fair to the other team. Still, the Paddle People continue their unique tradition to give their Pokes every advantage possible at each home game.

Oregon
With the amount of success this team has enjoyed over the past decade, it is easy to see why the Duck’s student section, aka the Pit Crew, is one of the best. In terms of crowd noise, Autzen stadium is one of the toughest venues for teams to travel to; quite impressive considering it only holds 55,000 total fans. The Ducks would be higher in the list if not for a student section of only 5,500, but you can be sure that those students will bring their A game every week.

Texas Tech
While most student sections are losing attendance across the nation, Texas Tech’s keeps rising at a record pace. In 2013, they set a season attendance record with a high of 14,915 students for the home opener. Student demand for tickets was so high that that the school eventually opened up another section to accommodate their rabid fans. They pride themselves in being eccentric with their traditions and the most notable would be their pre-game tortilla toss. Nobody is exactly sure as to why or how the tradition started, but students continue to toss tortillas on the field even though Jones AT&T Stadium prohibits doing so. Texas Tech has some of the most supportive and energetic students in the nation, making Lubbock one of the best locations to watch college football.